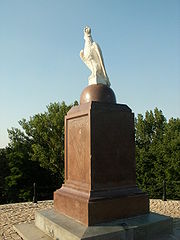 Wanda Mound is a tumulus
Tumulus
A tumulus is a mound of earth and stones raised over a grave or graves. Tumuli are also known as barrows, burial mounds, Hügelgrab or kurgans, and can be found throughout much of the world. A tumulus composed largely or entirely of stones is usually referred to as a cairn...
located in Mogiła (since 1949 a neighbourhood of district Nowa Huta
Nowa Huta
Nowa Huta - is the easternmost district of Kraków, Poland, . With more than 200,000 inhabitants it is one of the most populous areas of the city.- History :...
) in Kraków
Kraków
Kraków also Krakow, or Cracow , is the second largest and one of the oldest cities in Poland. Situated on the Vistula River in the Lesser Poland region, the city dates back to the 7th century. Kraków has traditionally been one of the leading centres of Polish academic, cultural, and artistic life...
, Poland
Poland
Poland , officially the Republic of Poland , is a country in Central Europe bordered by Germany to the west; the Czech Republic and Slovakia to the south; Ukraine, Belarus and Lithuania to the east; and the Baltic Sea and Kaliningrad Oblast, a Russian exclave, to the north...
. The mound is assumed to be the resting place of the legendary princess Wanda
Princess Wanda
Princess Wanda was the legendary daughter of Krakus, legendary founder of Kraków. Upon her father's death, she became queen of the Poles, but committed suicide to avoid an unwanted marriage....
. According to one version of the story, she committed suicide by drowning in the Vistula
Vistula
The Vistula is the longest and the most important river in Poland, at 1,047 km in length. The watershed area of the Vistula is , of which lies within Poland ....
river to avoid unwanted marriage. The mound is located close to the spot on the river bank where her body was found. Archaeological studies, conducted on site in 1913 and in mid-1960, did not provide any conclusive evidence of the mound's age and purpose.

The first written record of the mound comes from the 13th century. In 1860 it became a part of Austro-Hungarian
Austria-Hungary
Austria-Hungary , more formally known as the Kingdoms and Lands Represented in the Imperial Council and the Lands of the Holy Hungarian Crown of Saint Stephen, was a constitutional monarchic union between the crowns of the Austrian Empire and the Kingdom of Hungary in...
fortification
Fortification
Fortifications are military constructions and buildings designed for defence in warfare and military bases. Humans have constructed defensive works for many thousands of years, in a variety of increasingly complex designs...
s, pulled down only in 1968-1970. In 1890 a monument designed by Jan Matejko
Jan Matejko
Jan Matejko was a Polish painter known for paintings of notable historical Polish political and military events. His most famous works include oil on canvas paintings like Battle of Grunwald, paintings of numerous other battles and court scenes, and a gallery of Polish kings...
was erected at the top: an eagle on a plinth
Plinth
In architecture, a plinth is the base or platform upon which a column, pedestal, statue, monument or structure rests. Gottfried Semper's The Four Elements of Architecture posited that the plinth, the hearth, the roof, and the wall make up all of architectural theory. The plinth usually rests...
decorated with a relief
Relief
Relief is a sculptural technique. The term relief is from the Latin verb levo, to raise. To create a sculpture in relief is thus to give the impression that the sculpted material has been raised above the background plane...
of a sword and a distaff
Distaff
As a noun, a distaff is a tool used in spinning. It is designed to hold the unspun fibers, keeping them untangled and thus easing the spinning process. It is most commonly used to hold flax, and sometimes wool, but can be used for any type of fiber. Fiber is wrapped around the distaff, and tied in...
, and the inscription 'Wanda'.