Encyclopedia
Waimea is a census-designated place
Census-designated place
A census-designated place is a concentration of population identified by the United States Census Bureau for statistical purposes. CDPs are delineated for each decennial census as the statistical counterparts of incorporated places such as cities, towns and villages...
(CDP) in Kauai County
Kauai County, Hawaii
Kauai County is a county located in the U.S. state of Hawaii. It consists of the islands of Kauai, Niihau, Lehua, and Kaula, in the state of Hawaii. As of 2000 Census the population was 58,463...
, Hawaii
Hawaii
Hawaii is the newest of the 50 U.S. states , and is the only U.S. state made up entirely of islands. It is the northernmost island group in Polynesia, occupying most of an archipelago in the central Pacific Ocean, southwest of the continental United States, southeast of Japan, and northeast of...
, United States. The population was 1,787 at the 2000 census. The first Europeans to reach Hawaii landed in Waimea in 1778 (giving rise to Kauai's cheeky slogan: "Hawaii's Original Visitor Destination"). 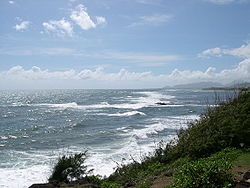 Waimea is a popular place for tourists, especially hikers who travel through the nearby canyons and ridges.

As of the census of 2000, there were 1,787 people, 620 households, and 456 families residing in the CDP. The population density was 1,707.2 people per square mile (657.1/km²). There were 676 housing units at an average density of 645.8 per square mile (248.6/km²). The racial makeup of the CDP was 12.7% White, 0.1% African American, 0.2% Native American, 43.0% Asian, 12.3% Pacific Islander, 1.1% from other races
Race (United States Census)
Race and ethnicity in the United States Census, as defined by the Federal Office of Management and Budget and the United States Census Bureau, are self-identification data items in which residents choose the race or races with which they most closely identify, and indicate whether or not they are...
, and 30.6% from two or more races. Hispanic or Latino of any race were 7.2% of the population.

There were 620 households out of which 33.2% had children under the age of 18 living with them, 52.3% were married couples living together, 15.6% had a female householder with no husband present, and 26.3% were non-families. 22.1% of all households were made up of individuals and 10.5% had someone living alone who was 65 years of age or older. The average household size was 2.80 and the average family size was 3.27.

The median income for a household in the CDP was $44,398, and the median income for a family was $46,591. Males had a median income of $38,542 versus $26,513 for females. The per capita income
Per capita income
Per capita income or income per person is a measure of mean income within an economic aggregate, such as a country or city. It is calculated by taking a measure of all sources of income in the aggregate and dividing it by the total population...
for the CDP was $18,778. About 8.1% of families and 11.5% of the population were below the poverty line, including 16.2% of those under age 18 and 8.7% of those age 65 or over.