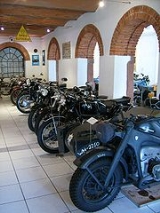 Encyclopedia
Wadgassen is a municipality in the district of Saarlouis
Saarlouis (district)
Saarlouis is a Kreis in the middle of the Saarland, Germany. Neighboring districts are Merzig-Wadern, Sankt Wendel, Neunkirchen, Saarbrücken, and the French département Moselle.-History:...
, in Saarland
Saarland
Saarland is one of the sixteen states of Germany. The capital is Saarbrücken. It has an area of 2570 km² and 1,045,000 inhabitants. In both area and population, it is the smallest state in Germany other than the city-states...
, Germany
Germany
Germany , officially the Federal Republic of Germany , is a federal parliamentary republic in Europe. The country consists of 16 states while the capital and largest city is Berlin. Germany covers an area of 357,021 km2 and has a largely temperate seasonal climate...
. It is situated on the river Saar
Saar River
The Saar is a river in northeastern France and western Germany, and a right tributary of the Moselle. It rises in the Vosges mountains on the border of Alsace and Lorraine and flows northwards into the Moselle near Trier. It has two headstreams , that both start near Mont Donon, the highest peak...
, approx. 6 km southeast of Saarlouis
Saarlouis
Saarlouis is a city in the Saarland, Germany, capital of the district of Saarlouis. In 2006, the town had a population of 38,327. Saarlouis, as the name implies, is located at the river Saar....
, and 15 km west of Saarbrücken
Saarbrücken
Saarbrücken is the capital of the state of Saarland in Germany. The city is situated at the heart of a metropolitan area that borders on the west on Dillingen and to the north-east on Neunkirchen, where most of the people of the Saarland live....
.

Between 1135 and 1792 the Premonstratensian
Premonstratensian
The Order of Canons Regular of Prémontré, also known as the Premonstratensians, the Norbertines, or in Britain and Ireland as the White Canons , are a Catholic religious order of canons regular founded at Prémontré near Laon in 1120 by Saint Norbert, who later became Archbishop of Magdeburg...
Wadgassen Abbey  was located here.