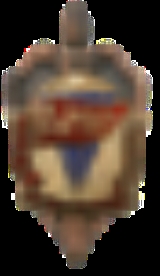 The exact lineage of Vympel is not known but the unit was formed in 1981 by the KGB
KGB
The KGB was the commonly used acronym for the . It was the national security agency of the Soviet Union from 1954 until 1991, and was the premier internal security, intelligence, and secret police organization during that time.The State Security Agency of the Republic of Belarus currently uses the...
Gen. Drozdov within the First Chief Directorate
First Chief Directorate
The First Chief Directorate , of the Committee for State Security , was the organization responsible for foreign operations and intelligence collection activities by the training and management of the covert agents, intelligence collection management, and the collection of political, scientific and...
of the KGB, as a dedicated spetsnaz
Spetsnaz
Spetsnaz, Specnaz tr: Voyska specialnogo naznacheniya; ) is an umbrella term for any special forces in Russian, literally "force of special purpose"...
unit specialised in deep penetration, sabotage
Sabotage
Sabotage is a deliberate action aimed at weakening another entity through subversion, obstruction, disruption, or destruction. In a workplace setting, sabotage is the conscious withdrawal of efficiency generally directed at causing some change in workplace conditions. One who engages in sabotage is...
, universal direct and covert action
Covert operation
A covert operation is a military, intelligence or law enforcement operation that is carried clandestinely and, often, outside of official channels. Covert operations aim to fulfill their mission objectives without any parties knowing who sponsored or carried out the operation...
, protection of Soviet embassies and espionage
Espionage
Espionage or spying involves an individual obtaining information that is considered secret or confidential without the permission of the holder of the information. Espionage is inherently clandestine, lest the legitimate holder of the information change plans or take other countermeasures once it...
cell
Clandestine cell system
A clandestine cell structure is a method for organizing a group of people in such a way that it can more effectively resist penetration by an opposing organization. Depending on the group's philosophy, its operational area, the communications technologies available, and the nature of the mission,...
activation in case of war. Most of the Vympel operatives mastered two or three foreign languages, for they were intended to act in foreign countries, deep behind enemy lines.

Vympel quickly gained the reputation of being among the best Soviet special forces units, surpassing its GRU
GRU
GRU or Glavnoye Razvedyvatel'noye Upravleniye is the foreign military intelligence directorate of the General Staff of the Armed Forces of the Russian Federation...
and MVD counterparts. However, after the collapse of the USSR, Vympel was decimated by endless re-organisation and re-definition. It passed under the aegis of the Security Ministry before being receded to the GUO (the two institutions were short-lived offspring of the ex-KGB during the Boris Yeltsin
Boris Yeltsin
Boris Nikolayevich Yeltsin was the first President of the Russian Federation, serving from 1991 to 1999.Originally a supporter of Mikhail Gorbachev, Yeltsin emerged under the perestroika reforms as one of Gorbachev's most powerful political opponents. On 29 May 1990 he was elected the chairman of...
era) and finally passed to the MVD (Interior Ministry). However, the militsiya
Militsiya
Militsiya or militia is used as an official name of the civilian police in several former communist states, despite its original military connotation...
had no use for such a unit. The bulk of the Vympel operatives could not stand the humiliation of being subordinated to the police, and duly resigned: of 278 officers, only 57 chose to remain within the MVD. The unit was re-named "Vega."

In 1995, the FSB
FSB (Russia)
The Federal Security Service of the Russian Federation is the main domestic security agency of the Russian Federation and the main successor agency of the Soviet Committee of State Security . Its main responsibilities are counter-intelligence, internal and border security, counter-terrorism, and...
Special Operations Center (TsSN FSB) was granted control over Vympel. The group regained its original name and was reintegrated into the Intelligence Service structures. The emphasis shifted from covert and clandestine sabotage operations to counter-terrorism
Counter-terrorism
Counter-terrorism is the practices, tactics, techniques, and strategies that governments, militaries, police departments and corporations adopt to prevent or in response to terrorist threats and/or acts, both real and imputed.The tactic of terrorism is available to insurgents and governments...
and nuclear safety enforcement. Vympel operatives undergo special training related to improvised or special explosive devices, permitting them to use "terrorist-like" tactics to carry out their operations. Physical training includes close hand combat, parachute training, diving, underwater combat techniques, climbing, and alpine rope techniques. Regional groups of Vympel were deployed in cities with especially important nuclear facilities.

Vympel (i.e. the Directorate "V" of the TsSN FSB) is still a classified and secretive unit. It took part in Russia's Chechen campaigns
Chechen War
There have been two Chechen Wars:* 1940–1944 insurgency in Chechnya* First Chechen War, 1994–1996* Second Chechen War, 1999–2009...
and in storming of the Supreme Soviet
Supreme Soviet
The Supreme Soviet of the Soviet Union was the Supreme Soviet in the Soviet Union and the only one with the power to pass constitutional amendments...
building during the 1993 Russian constitutional crisis. Little is known about its current operations and activities, the exception being the capture of the Chechen militant leader Salman Raduyev
Salman Raduyev
Salman Raduyev was a Chechen separatist warlord considered to be one of the most radical and notorious Chechen rebel commanders of the period between 1994 and 1999...
in March 2000 and the assault on the school in Beslan
Beslan school hostage crisis
The Beslan school hostage crisis of early September 2004 was a three-day hostage-taking of over 1,100 people which ended in the deaths of over 380...
in September 2004.