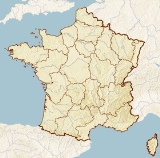 Encyclopedia
Voyennes is a commune
Communes of France
The commune is the lowest level of administrative division in the French Republic. French communes are roughly equivalent to incorporated municipalities or villages in the United States or Gemeinden in Germany...
in the Somme
Somme
Somme is a department of France, located in the north of the country and named after the Somme river. It is part of the Picardy region of France....
department in Picardie
Picardie
Picardy is one of the 27 regions of France. It is located in the northern part of France.-History:The historical province of Picardy stretched from north of Noyon to Calais, via the whole of the Somme department and the north of the Aisne department...
in northern France
France
The French Republic , The French Republic , The French Republic , (commonly known as France , is a unitary semi-presidential republic in Western Europe with several overseas territories and islands located on other continents and in the Indian, Pacific, and Atlantic oceans. Metropolitan France...
.

Voyennes is situated 30 miles(48 km) west of Amiens
Amiens
Amiens is a city and commune in northern France, north of Paris and south-west of Lille. It is the capital of the Somme department in Picardy...
, on the D417 road in the valley of the Somme River
Somme River
The Somme is a river in Picardy, northern France. The name Somme comes from a Celtic word meaning tranquility. The department Somme was named after this river....
. 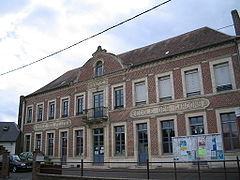