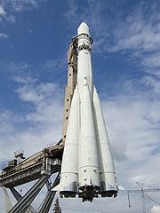 Overview
Vostok was a family of rockets derived from the Soviet
Soviet Union
The Soviet Union , officially the Union of Soviet Socialist Republics , was a constitutionally socialist state that existed in Eurasia between 1922 and 1991....
R-7 Semyorka
R-7 Semyorka
The R-7 was a Soviet missile developed during the Cold War, and the world's first intercontinental ballistic missile. The R-7 made 28 launches between 1957 and 1961, but was never deployed operationally. A derivative, the R-7A, was deployed from 1960 to 1968...
ICBM designed for the human spaceflight
Human spaceflight
Human spaceflight is spaceflight with humans on the spacecraft. When a spacecraft is manned, it can be piloted directly, as opposed to machine or robotic space probes and remotely-controlled satellites....
programme
Vostok programme
The Vostok programme was a Soviet human spaceflight project that succeeded in putting a person into Earth's orbit for the first time. The programme developed the Vostok spacecraft from the Zenit spy satellite project and adapted the Vostok rocket from an existing ICBM design...
. This family of rockets launched the first artificial satellite ("sputnik") and the first manned spacecraft in human history. It was a subset of the R-7 family of rockets.

On March 18, 1980 a Vostok-2M rocket exploded on its launch pad at Plesetsk
Plesetsk Cosmodrome
Plesetsk Cosmodrome is a Russian spaceport, located in Arkhangelsk Oblast, about 800 km north of Moscow and approximately 200 km south of Arkhangelsk.-Overview:...
during a fueling operation, killing 48.

What was the top speed of the Vostok Rocket when Valentina Tereshkova rode in it as the first woman in space? And, also her re-entry speed co...
More
x