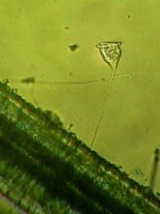 Encyclopedia
Vorticella is a genus of protozoa
Protozoa
Protozoa are a diverse group of single-cells eukaryotic organisms, many of which are motile. Throughout history, protozoa have been defined as single-cell protists with animal-like behavior, e.g., movement...
, with over 16 known species. They are stalked inverted bell
Inverted bell
The inverted bell is a metaphorical name for geometric shape that resembles a bell upside down.In architecture, the term is applied, e.g., to describe the shape of the capitals of Corinthian columns....
-shaped ciliate
Ciliate
The ciliates are a group of protozoans characterized by the presence of hair-like organelles called cilia, which are identical in structure to flagella but typically shorter and present in much larger numbers with a different undulating pattern than flagella...
s, placed among the peritrich
Peritrich
The peritrichs are a large and distinctive group of ciliate protozoa. They are usually bell or disc shaped, with a prominent paroral membrane arising from the oral cavity and circling counter-clockwise around the anterior of the cell, accompanied by a smaller series of membranelles...
s. Each cell has a separate stalk anchored onto the substrate, which contains a contractile fibril
Fibril
Fibril is a fine fiber approximately 1 nm in diameter.Cytoplasmic fibrils are observed on the protoplasmic cylinders found in most spirochetal species, although no function of the cytoplasmic fibrils has been ascribed....
called a myoneme. When stimulated this shortens, causing the stalk to coil like a spring. Vorticella mainly live in freshwater ponds and streams—generally anywhere protists are plentiful.

Reproduction is by budding
Budding
Budding is a form of asexual reproduction in which a new organism grows on another one. The new organism remains attached as it grows, separating from the parent organism only when it is mature. Since the reproduction is asexual, the newly created organism is a clone and is genetically identical...
, where the cell undergoes longitudinal fission and only one daughter keeps the stalk. The free daughter becomes a telotroch
Telotroch
Telotroch is the free-swimming stage of members of the order Sessilida. Sessilida are ciliate protozoa of the subclass Peritrichia.A sessile individual can turn into a motile one to migrate to a better place....
, which swims until it finds suitable substrate to fix and develop its own stalk. They reproduce by fission, which is also known as cell division. They are also capable of reproducing by conjugation. Conjugation is a form of sexual reproduction where two vorticella attach at the oral groove and swap DNA.

Other genera such as Carchesium resemble Vorticella but are branched or colonial.

Vorticellas sometimes stay in clusters. Some people learn these groups as colonies, but they are not true colonies because each vorticella has its own individual stalk. This allows the vorticella to detach from the cluster at any time, usually by reverting
to a telotroch when environmental conditions are unfavorable. 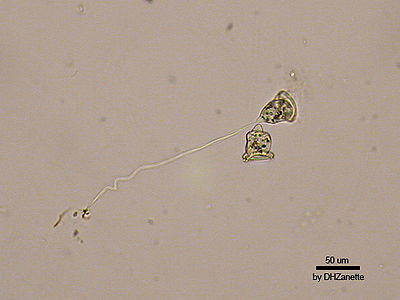 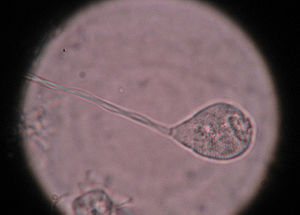