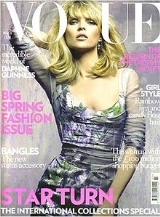 Encyclopedia
The British
United Kingdom
The United Kingdom of Great Britain and Northern IrelandIn the United Kingdom and Dependencies, other languages have been officially recognised as legitimate autochthonous languages under the European Charter for Regional or Minority Languages...
edition of Vogue
Vogue (magazine)
Vogue is a fashion and lifestyle magazine that is published monthly in 18 national and one regional edition by Condé Nast.-History:In 1892 Arthur Turnure founded Vogue as a weekly publication in the United States. When he died in 1909, Condé Montrose Nast picked up the magazine and slowly began...
is a fashion
Fashion
Fashion, a general term for a currently popular style or practice, especially in clothing, foot wear, or accessories. Fashion references to anything that is the current trend in look and dress up of a person...
magazine
Magazine
Magazines, periodicals, glossies or serials are publications, generally published on a regular schedule, containing a variety of articles. They are generally financed by advertising, by a purchase price, by pre-paid magazine subscriptions, or all three...
that has been published since 1916.

When British Vogue was launched, it was the first overseas edition of an existing fashion magazine. Under the magazine's first editor, Elspeth Champcommunal, the magazine was essentially the same as the American edition, but for its anglicised spellings. Under its second editor, Dorothy Todd, the magazine shifted its focus from fashion to literature and lost much of its audience. It was under Alison Settle, the magazine's third editor, that the magazine took off. British Vogue's current editor-in-chief is Alexandra Shulman
Alexandra Shulman
Alexandra Shulman, OBE , is the editor of the British edition of Vogue. She is one of the country's most oft-quoted voices on fashion trends. She took the helm of Vogue in 1992, presiding over a circulation increase to 200,000 and a higher profile for the publication...
. British Vogue is more commercial in approach than other editions of Vogue.