Encyclopedia
Vladivostok International Airport ( Mezhdunarodnyi aeroport Vladivostok) is located near Artyom
Artyom
Artyom is a city in Primorsky Krai, Russia, situated in the northern part of the Muravyov-Amursky Peninsula. Population: Artyom is built mainly with one-, two-, and five-story panel buildings, though a comparatively large number of wooden private houses can be seen.-History:Artyom was founded in...
, Primorsky Krai
Primorsky Krai
Primorsky Krai , informally known as Primorye , is a federal subject of Russia . Primorsky means "maritime" in Russian, hence the region is sometimes referred to as Maritime Province or Maritime Territory. Its administrative center is in the city of Vladivostok...
, Russia
Russia
Russia or , officially known as both Russia and the Russian Federation , is a country in northern Eurasia. It is a federal semi-presidential republic, comprising 83 federal subjects...
roughly an hour's drive (44 kilometers) north of center of the city of Vladivostok
Vladivostok
The city is located in the southern extremity of Muravyov-Amursky Peninsula, which is about 30 km long and approximately 12 km wide.The highest point is Mount Kholodilnik, the height of which is 257 m...
. It was formerly known as Knevichi Airport, named after village Knevichi. It consists of two passenger terminals: the Domestic Terminal and the International Terminal.

The airport has two airfields, Lake Springs and Knevichi.

Lake Springs Airfield
The Lake Springs airfield was designed for aircraft operating on regional routes. It has two artificially covered landing strips with a width of 21 meters. One is 1000 meters in length and the second is 600 meters. It isn't currently used for scheduled flights, and general aviation operates from there instead.

Knevichi
The Knevichi airfield was designed for all types of aircraft and has two artificially covered take-off and landing strips:
The first runway is 3500 meters in length and 60 meters in width, and has a PCN 44/R/B/X/T (mixed) surface covering;
The second runway has a length of 2700 meters and width of 60 meters, with a PCN 28/R/B/X/T surface covering.

The Domestic Terminal of the airport underwent complete renovation in 2005-2006, which made it one of the most comfortable and up-to-date airport terminals in Russia. The renovated terminal was re-opened on December 19, 2006.

Russian and regional government announced plans to rebuild Vladivostok International Airport prior to the APEC Russia 2012
APEC Russia 2012
The APEC Russia 2012 summit will be the 24th annual gathering of APEC leaders. Leaders from the member economies will meet on Russky Island, off the coast of Vladivostok, Russia in 2012....
Summit on Russky Island
Russky Island
Russky Island is a Russian island off Vladivostok, in the Peter the Great Gulf, Sea of Japan. It is located about 9,334 kilometres east of Moscow. The Eastern Bosphorus separates the island from the Muravyov-Amursky Peninsula....
, south of Vladivostok
Vladivostok
The city is located in the southern extremity of Muravyov-Amursky Peninsula, which is about 30 km long and approximately 12 km wide.The highest point is Mount Kholodilnik, the height of which is 257 m...
. The projected capacity should increase to 1360 passengers an hour (up to 5 million a year). 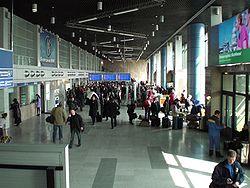