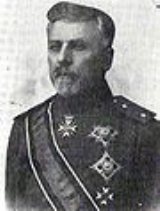 Encyclopedia
Vladimir Minchev Vazov was a Bulgaria
Bulgaria
Bulgaria , officially the Republic of Bulgaria , is a parliamentary democracy within a unitary constitutional republic in Southeast Europe. The country borders Romania to the north, Serbia and Macedonia to the west, Greece and Turkey to the south, as well as the Black Sea to the east...
n officer. He led the Bulgarian forces during the successful defensive operation at Dojran
Battle of Doiran
The third Battle of Doiran was fought from 18 September to 19 September 1918, with the Greeks and the British assaulting the positions of the Bulgarian First Army near Dojran Lake. The battle was part of World War I and took place in the Balkan Theatre...
during the First World War.

Vladimir Vazov was born May 14, 1868 to Mincho Vazov and Suba Hadjinikolova. His brothers were the writer Ivan Vazov
Ivan Vazov
Ivan Minchov Vazov was a Bulgarian poet, novelist and playwright, often referred to as "the Patriarch of Bulgarian literature". He was born in Sopot, a town in the Rose Valley of Bulgaria ....
, the officer Georgi Vazov and the politician Boris Vazov.

In 1886 Vladimir Vazov entered the Military School in Sofia
Sofia
Sofia is the capital and largest city of Bulgaria and the 12th largest city in the European Union with a population of 1.27 million people. It is located in western Bulgaria, at the foot of Mount Vitosha and approximately at the centre of the Balkan Peninsula.Prehistoric settlements were excavated...
. After he graduated in 1888 he was assigned as a second lieutenant to the 5th artillery regiment in Shumen
Shumen
Shumen is the tenth-largest city in Bulgaria and capital of Shumen Province. In the period 1950–1965 it was called Kolarovgrad, after the name of the communist leader Vasil Kolarov...
.

During the First Balkan War
First Balkan War
The First Balkan War, which lasted from October 1912 to May 1913, pitted the Balkan League against the Ottoman Empire. The combined armies of the Balkan states overcame the numerically inferior and strategically disadvantaged Ottoman armies and achieved rapid success...
Vladimir Vazov served as commander of the 4th Quick-Firing
Quick-firing gun
A quick-firing gun is an artillery piece, typically a gun or howitzer, which has several characteristics which taken together mean the weapon can fire at a fast rate...
Artillery Regiment of the 1st Sofia Infantry Division. When the war was declared on 5 of October 1912 some 21 officers and 1168 soldiers were serving in his regiment.

During the Second Balkan War
Second Balkan War
The Second Balkan War was a conflict which broke out when Bulgaria, dissatisfied with its share of the spoils of the First Balkan War, attacked its former allies, Serbia and Greece, on 29 June 1913. Bulgaria had a prewar agreement about the division of region of Macedonia...
Vladimir retained the command of his regiment and participated in the fighting around Tsaribrod, Pirot
Pirot
Pirot is a town and municipality located in south-eastern Serbia. According to 2011 census, the town has a total population of 38,432, while the population of the municipality is 57,911...
, Bubliak ad Gradoman.

The most successful pages of his biography were written during the First World War. On 1 of March he took the command of the 9th Pleven Infantry Division which was part of the First Bulgarian Army. Beginning in 1916 the division occupied a stretch of the Macedonian Front between the river Vardar
Vardar
The Vardar or Axios is the longest and major river in the Republic of Macedonia and also a major river of Greece. It is long, and drains an area of around . The maximum depth of river is ....
and lake Dojran
Dojran
Dojran was a city located on the western shore of Dojran Lake in the south-eastern part of the Republic of Macedonia. Today, it is collective name for two villages that exist on the territory of the ruined city: Nov Dojran and Star Dojran, which contains both old ruins and recent construction,...
.

As soon as he was appointed he inspected the entire section of the front that was under his command and took measures to strengthen and fortify it. Under his guidance the forced were deployed in order to create a defence in depth
Defence in depth
Defence in depth is a military strategy; it seeks to delay rather than prevent the advance of an attacker, buying time and causing additional casualties by yielding space...
.

His efforts to improve the positions were soon tested during the Second Battle of Doiran
Battle of Doiran (1917)
During the Second conference of the Military Counsel of the Entente in Chanties, it was decided to continue with the attempts at a breakthrough. The task for the Entente forces on the Macedonian Front was to inflict major defeats on the Bulgarian army and effect a wide breakthrough in the Balkans...
between 22 and 26 of April 1917. Some 86 heavy and 74 field British guns bombarded the line with more than 100,000 shells but caused insignificant damage and the following infantry attack suffered a heavy defeat. In early May the British resumed their assault but were again defeated and suffered heavy casualties. Following this attack the Bulgarian 34th Troyan Regiment alone buried the bodies of some 2,290 Allied officers and soldiers. Due to his significant contribution for the victory on 20 of May 1917 Vladimir Vazov was promoted to major general
Major General
Major general or major-general is a military rank used in many countries. It is derived from the older rank of sergeant major general. A major general is a high-ranking officer, normally subordinate to the rank of lieutenant general and senior to the ranks of brigadier and brigadier general...
.

The location of the Doiran Sector was crucial as it represented the shortest possible route to the valley of the Vardar
Vardar
The Vardar or Axios is the longest and major river in the Republic of Macedonia and also a major river of Greece. It is long, and drains an area of around . The maximum depth of river is ....
and during the summer of 1918 its the defence was expanded to consisted of for lines arrayed in depth. Hence it was much better prepared to face an attack than the previous year.

When the Allied Vardar Offensive
Vardar Offensive
The Vardar Offensive that took place between 14 and 29 of September 1918 was the last major military operation on the Macedonian Front during World War I...
began the British and two Greek divisions once again attacked the 9th Pleven Division at Doiran. During this Third Battle of Doiran
Battle of Doiran
The third Battle of Doiran was fought from 18 September to 19 September 1918, with the Greeks and the British assaulting the positions of the Bulgarian First Army near Dojran Lake. The battle was part of World War I and took place in the Balkan Theatre...
the Allies once again enjoyed significant advantage in firepower and manpower, being able to bombard the Bulgarian position with over 300,000 ordinary and gas shells. Despite this the damage to the fortifications was limited and the fighting again resulted in a decisive Bulgarian victory. According to official British sources the Allied losses totalled just over 7,000. Bulgarian sources however report a figure of over 11,000.

The Bulgarian and German commanders on the Macedonian Front were not able to fully use the results of the decisive victory at Doiran to their advantage and Bulgaria signed an armistice on 29 of September 1918 thus ending its participation in the First World War.

On February 24, 1920 lieutenant-general Vazov went into the reserve. In 1926 he became mayor of Sofia
Sofia
Sofia is the capital and largest city of Bulgaria and the 12th largest city in the European Union with a population of 1.27 million people. It is located in western Bulgaria, at the foot of Mount Vitosha and approximately at the centre of the Balkan Peninsula.Prehistoric settlements were excavated...
. During his mandate (until 1932) the fire department was reformed, the electrical network expanded, and the public transport improved. Sofia became one of the “greenest” capitals in Europe.

Among the most notable moments of Vladimir Vazov’s life was his visit to England
England
England is a country that is part of the United Kingdom. It shares land borders with Scotland to the north and Wales to the west; the Irish Sea is to the north west, the Celtic Sea to the south west, with the North Sea to the east and the English Channel to the south separating it from continental...
in 1936. The British legion celebrated the British victory in World War I
World War I
World War I , which was predominantly called the World War or the Great War from its occurrence until 1939, and the First World War or World War I thereafter, was a major war centred in Europe that began on 28 July 1914 and lasted until 11 November 1918...
. The British veterans invited one of their worthiest opponents on the battlefield. He was personally greeted by Lord Milne
George Milne, 1st Baron Milne
Field Marshal George Francis Milne, 1st Baron Milne, GCB, GCMG, DSO , was a British military commander who served as Chief of the Imperial General Staff from 1926 to 1933.-Army career:...
, who shook his hand with the words "It is a pleasure to meet the Bulgarian delegation, as even though we were enemies, you - like us - fought not only like brave men, but also like gentlemen." The British paid great honour to General Vazov as they lowered their national flags in his name. The chairman of the British legion Major Goldy said in his speech: “He is one of the few foreign officers whose name features in our history”.

The last years of his life were spent in the village of Ribaritsa
Ribaritsa, Lovech Province
Ribaritsa is a village in Teteven Municipality, Lovech Province. It lies at the foot of the Teteven Balkan Mountains, on the banks of the Beli Vit River, 12 kilometres from Teteven, 74 kilometres southwest of Lovech and 138 kilometres northeast of Sofia. Due to its mountainous location 701 metres...
(near Lovech
Lovech
Lovech is a town in north-central Bulgaria with a population of 36,296 as of February 2011. It is the administrative centre of the Lovech Province and of the subordinate Lovech Municipality. The town is located about 150 km northeast from the capital city of Sofia...
), where he died in 1945.