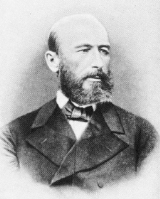 Encyclopedia
Aleksandr Mikhailovich Butlerov (Алекса́ндр Миха́йлович Бу́тлеров) (September 15, 1828, Chistopol
Chistopol
Chistopol is a town in the Republic of Tatarstan, Russia, located on the left bank of the Kuybyshev Reservoir, on the Kama River. Population: It is served by the Chistopol Airport.-History:It was first mentioned in chronicles at the end of the 17th century...
– August 17, 1886, new style) was a Russian chemist
Chemist
A chemist is a scientist trained in the study of chemistry. Chemists study the composition of matter and its properties such as density and acidity. Chemists carefully describe the properties they study in terms of quantities, with detail on the level of molecules and their component atoms...
, one of the principal creators of the theory of chemical structure
Chemical structure
A chemical structure includes molecular geometry, electronic structure and crystal structure of molecules. Molecular geometry refers to the spatial arrangement of atoms in a molecule and the chemical bonds that hold the atoms together. Molecular geometry can range from the very simple, such as...
(1857–1861), the first to incorporate double bonds into structural formulas, the discoverer of hexamine
Hexamine
Hexamethylenetetramine is a heterocyclic organic compound with the formula 6N4. This white crystalline compound is highly soluble in water and polar organic solvents. It has a cage-like structure similar to adamantane. It is useful in the synthesis of other chemical compounds, e.g. plastics,...
(1859), and the discoverer of the formose reaction
Formose reaction
The formose reaction, discovered by Aleksandr Butlerov in 1861, involves the formation of sugars from formaldehyde. Formose is a contraction of formaldehyde and aldose.-Reaction and mechanism:...
.

The crater Butlerov
Butlerov (crater)
Butlerov is a lunar impact crater that is located on the far side of the Moon, beyond the western limb and past the area sometimes brought into view through libration. It is located one crater diameter to the west of the crater Pease...
on the Moon
Moon
The Moon is Earth's only known natural satellite,There are a number of near-Earth asteroids including 3753 Cruithne that are co-orbital with Earth: their orbits bring them close to Earth for periods of time but then alter in the long term . These are quasi-satellites and not true moons. For more...
is named after him.

Aleksandr Butlerov was born in Chistopol into a landowning family.