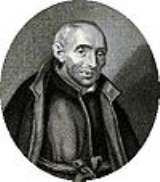 Vincenzo Carafa or Caraffa (5 May 1585, Andria (Italy
Italy
Italy , officially the Italian Republic languages]] under the European Charter for Regional or Minority Languages. In each of these, Italy's official name is as follows:;;;;;;;;), is a unitary parliamentary republic in South-Central Europe. To the north it borders France, Switzerland, Austria and...
) - 6 June 1649, Rome
Rome
Rome is the capital of Italy and the country's largest and most populated city and comune, with over 2.7 million residents in . The city is located in the central-western portion of the Italian Peninsula, on the Tiber River within the Lazio region of Italy.Rome's history spans two and a half...
) was an Italian Jesuit priest and spiritual writer, elected the 7th Superior-General of the Society of Jesus. He is a Servant of God
Servant of God
Servant of God is a title given to individuals by various religions, but in general the phrase is used to describe a person believed to be pious in his or her faith tradition. In the Catholic Church, it designates someone who is being investigated by the Church for possibly being recognized as a...
.

He was of the family of the Counts of Montorio
Montorio
Montorio may refer to:*Montorio al Vomano, a town in the province of Teramo, Italy*Montorio nei Frentani, a town in the province of Campobasso, Italy*Montorio Romano, a town in the province of Rome, Italy*Montorio, Burgos, a municipality in Spain...
, and a relative of Pope Paul IV
Pope Paul IV
Pope Paul IV, C.R. , né Giovanni Pietro Carafa, was Pope from 23 May 1555 until his death.-Early life:Giovanni Pietro Carafa was born in Capriglia Irpina, near Avellino, into a prominent noble family of Naples...
. He entered the Society of Jesus
Society of Jesus
The Society of Jesus is a Catholic male religious order that follows the teachings of the Catholic Church. The members are called Jesuits, and are also known colloquially as "God's Army" and as "The Company," these being references to founder Ignatius of Loyola's military background and a...
on 4 October, 1604, and was sixty years of age at his election as general. He died four years after.

He had taught philosophy and governed the principal house of the Society at Naples, and was provincial at the time of the election to the generalship. In 1635 he had published his Fascetto di Mirra (Bundle of Myrrh), which has been translated into several languages. He is the author of several other ascetical works, such as Cammino del Cielo, Cittadino del Cielo, Il Peregrino della terra, Idea Christiani hominis, and Il Serafino, all previous to his election. He wrote under the name Aloysius Sidereus.

Besides personal correspondence his only known writing as Superior General was his letter addressed to all Jesuits: De mediis conservandi primævum spiritum Societatis (The means of preserving the primitive spirit of the Society).

His short term in office coincided with the beginning of the controversy with Jansenist theologians and the troubles with Palafox, Bishop of La Puebla. A great scandal occurred in Spain because of unsuccessful business speculations by a coadjutor brother, and in France on account of the open apostasy to Calvinism
Calvinism
Calvinism is a Protestant theological system and an approach to the Christian life...
of a priest; but the martyrdom of men like Isaac Jogues
Isaac Jogues
Isaac Jogues was a Jesuit priest, missionary, and martyr who traveled and worked among the native populations in North America. He gave the original European name to Lake George, calling it Lac du Saint Sacrement, Lake of the Blessed Sacrament. In 1646, Jogues was martyred by the Mohawks near ...
, Brébeuf, Neville, and others in Canada and England was an assurance that the Society's ancient fervour had not relaxed.