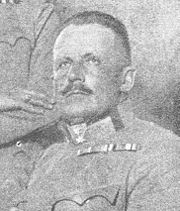 Viktor Weber Edler von Webenau (* 13 November 1861 in Neuhaus
Neuhaus, Carinthia
Neuhaus is a small town in the Austrian state of Carinthia, south-east of Klagenfurt, in the district of Völkermarkt, about 4 km from the border with Slovenia.- Geographical Location :...
; † 6 May 1932 in Innsbruck
Innsbruck
- Main sights :- Buildings :*Golden Roof*Kaiserliche Hofburg *Hofkirche with the cenotaph of Maximilian I, Holy Roman Emperor*Altes Landhaus...
), General
General
A general officer is an officer of high military rank, usually in the army, and in some nations, the air force. The term is widely used by many nations of the world, and when a country uses a different term, there is an equivalent title given....
in the Austro-Hungarian army while World War I
World War I
World War I , which was predominantly called the World War or the Great War from its occurrence until 1939, and the First World War or World War I thereafter, was a major war centred in Europe that began on 28 July 1914 and lasted until 11 November 1918...
, military governor of Montenegro
Montenegro
Montenegro Montenegrin: Crna Gora Црна Гора , meaning "Black Mountain") is a country located in Southeastern Europe. It has a coast on the Adriatic Sea to the south-west and is bordered by Croatia to the west, Bosnia and Herzegovina to the northwest, Serbia to the northeast and Albania to the...
between 1916 and 1917 and head of the Austro-Hungarian armistice commission (Armistice of villa Giusti) 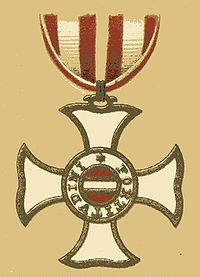 He was additionally appointed a Geheimer Rat (Privy Councillor).