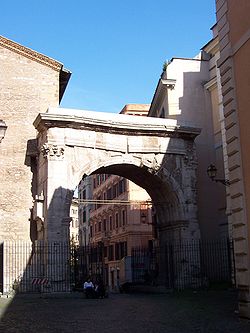 The Via Labicana was an ancient road
Roman road
The Roman roads were a vital part of the development of the Roman state, from about 500 BC through the expansion during the Roman Republic and the Roman Empire. Roman roads enabled the Romans to move armies and trade goods and to communicate. The Roman road system spanned more than 400,000 km...
of Italy
Italy
Italy , officially the Italian Republic languages]] under the European Charter for Regional or Minority Languages. In each of these, Italy's official name is as follows:;;;;;;;;), is a unitary parliamentary republic in South-Central Europe. To the north it borders France, Switzerland, Austria and...
, leading east southeast from Rome
Rome
Rome is the capital of Italy and the country's largest and most populated city and comune, with over 2.7 million residents in . The city is located in the central-western portion of the Italian Peninsula, on the Tiber River within the Lazio region of Italy.Rome's history spans two and a half...
. It seems possible that the road at first led to Tusculum
Tusculum
Tusculum is a ruined Roman city in the Alban Hills, in the Latium region of Italy.-Location:Tusculum is one of the largest Roman cities in Alban Hills. The ruins of Tusculum are located on Tuscolo hill—more specifically on the northern edge of the outer crater ring of the Alban volcano...
, that it was then extended to Labici
Labici
Labici or Labicum was an ancient city of Latium, lying in the territory of the modern Monte Compatri, about 20 km SE from Rome, on the northern slopes of the Alban Hills...
, and later still became a road for through traffic; it may even have superseded the Via Latina
Via Latina
The Via Latina was a Roman road of Italy, running southeast from Rome for about 200 kilometers.It led from the Porta Latina in the Aurelian walls of Rome to the pass of Mons Algidus; it was important in the early military history of Rome...
as a route to the southeast, for, while the distance from Rome to their main junction at Ad Bivium (or to another junction at Compitum Anagninum) is practically identical, the summit level of the former is 22 m lower than that of the latter, a little to the west of the pass of Mons Algidus. After their junction it is probable that the road bore the name Via Latina rather than Via Labicana. The course of the road after the first six miles from Rome is not identical with that of any modern road, but can be clearly traced by remains of pavement and buildings along its course.

Via Labicana entered Rome through the Aurelian wall via the ancient monumental gate of Porta Prenestina, and reached, after an internal part, the Servian Wall
Servian Wall
The Servian Wall was a defensive barrier constructed around the city of Rome in the early 4th century BC. The wall was up to 10 metres in height in places, 3.6 metres wide at its base, 11 km long, and is believed to had 16 main gates, though many of these are mentioned only from...
, entering through the Porta Esquilina, decorated with the arch of Gallienus
Gallienus
Gallienus was Roman Emperor with his father Valerian from 253 to 260, and alone from 260 to 268. He took control of the Empire at a time when it was undergoing great crisis...
. The section of the road near Rome is now known as the Via Casilina. A statue of Augustus as pontifex maximus
Pontifex Maximus
The Pontifex Maximus was the high priest of the College of Pontiffs in ancient Rome. This was the most important position in the ancient Roman religion, open only to patricians until 254 BC, when a plebeian first occupied this post...
found at a villa of Livia
Livia
Livia Drusilla, , after her formal adoption into the Julian family in AD 14 also known as Julia Augusta, was a Roman empress as the third wife of the Emperor Augustus and his adviser...
on this road is known as the "Via Labicana type
Via Labicana Augustus
The Via Labicana Augustus is a sculpture of the Roman emperor Augustus as Pontifex Maximus, with his head veiled for a sacrifice. The statue is dated as having been made after 12 BC. It was found on slopes of Oppian Hill, in the Via Labicana, in 1910...
" and is housed at the National Roman Museum. The Roman Emperor Didius Julianus
Didius Julianus
Didius Julianus , was Roman Emperor for three months during the year 193. He ascended the throne after buying it from the Praetorian Guard, who had assassinated his predecessor Pertinax. This led to the Roman Civil War of 193–197...
was buried by the fifth milestone on the Via Labicana, after being executed in 193
193
Year 193 was a common year starting on Monday of the Julian calendar. At the time, it was known as the Year of the Consulship of Sosius and Ericius...
.