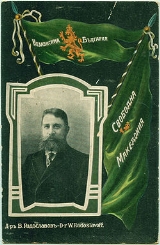 Encyclopedia
Vasil Radoslavov (27 July 1854 – 21 October 1929) was a leading Bulgaria
Bulgaria
Bulgaria , officially the Republic of Bulgaria , is a parliamentary democracy within a unitary constitutional republic in Southeast Europe. The country borders Romania to the north, Serbia and Macedonia to the west, Greece and Turkey to the south, as well as the Black Sea to the east...
n liberal
Liberalism
Liberalism is the belief in the importance of liberty and equal rights. Liberals espouse a wide array of views depending on their understanding of these principles, but generally, liberals support ideas such as constitutionalism, liberal democracy, free and fair elections, human rights,...
politician who twice served as Prime Minister. He was Premier of the country throughout most of World War I
World War I
World War I , which was predominantly called the World War or the Great War from its occurrence until 1939, and the First World War or World War I thereafter, was a major war centred in Europe that began on 28 July 1914 and lasted until 11 November 1918...
.

Born in Lovech
Lovech
Lovech is a town in north-central Bulgaria with a population of 36,296 as of February 2011. It is the administrative centre of the Lovech Province and of the subordinate Lovech Municipality. The town is located about 150 km northeast from the capital city of Sofia...
, Radoslavov studied law at Heidelberg
Ruprecht Karl University of Heidelberg
The Ruprecht-Karls-Universität Heidelberg is a public research university located in Heidelberg, Baden-Württemberg, Germany. Founded in 1386, it is the oldest university in Germany and was the third university established in the Holy Roman Empire. Heidelberg has been a coeducational institution...
and became a supporter of Germany
Germany
Germany , officially the Federal Republic of Germany , is a federal parliamentary republic in Europe. The country consists of 16 states while the capital and largest city is Berlin. Germany covers an area of 357,021 km2 and has a largely temperate seasonal climate...
from then on. He became a political figure in 1884 when he was appointed Minister of Justice in the cabinet of Petko Karavelov
Petko Karavelov
Petko Karavelov was a leading Bulgarian liberal politician who served as Prime Minister on four occasions....
, also holding the position under Archbishop Kliment Turnovski
Kliment Turnovski
Kliment Turnovski, , was a leading Bulgarian clergyman and politician...
. He succeeded Karavelov as Prime Minister in 1886, a brief reign that was marked by corruption and ultimately a split in the Liberal Party, with a Radoslav Liberal Party formed in 1887 as a grouping for right-wing liberals. Radoslavov was noted for his strong support for friendship with Austria-Hungary
Austria-Hungary
Austria-Hungary , more formally known as the Kingdoms and Lands Represented in the Imperial Council and the Lands of the Holy Hungarian Crown of Saint Stephen, was a constitutional monarchic union between the crowns of the Austrian Empire and the Kingdom of Hungary in...
.

He returned to government in 1899 as Minister for Internal Affairs in the government of Todor Ivanchov
Todor Ivanchov
Todor Ivanchov was a supporter of Vasil Radoslavov who served as Prime Minister of Bulgaria from 13 October 1899 to 25 January 1901.Born in Veliko Tarnovo, he was educated at Robert College and in Montpellier, specializing in economics...
, although after this he remained out of office until 1913 when he returned as Prime Minister. His anti-Russia
Russia
Russia or , officially known as both Russia and the Russian Federation , is a country in northern Eurasia. It is a federal semi-presidential republic, comprising 83 federal subjects...
n rhetoric impressed Ferdinand
Ferdinand I of Bulgaria
Ferdinand , born Ferdinand Maximilian Karl Leopold Maria of Saxe-Coburg and Gotha-Koháry, was the ruler of Bulgaria from 1887 to 1918, first as knyaz and later as tsar...
who worked closely with Radoslavov in shaping foreign policy. He secured a large loan from Germany and Austria-Hungary
Austria-Hungary
Austria-Hungary , more formally known as the Kingdoms and Lands Represented in the Imperial Council and the Lands of the Holy Hungarian Crown of Saint Stephen, was a constitutional monarchic union between the crowns of the Austrian Empire and the Kingdom of Hungary in...
in July 1914 but also managed to delay Bulgarian entry into the War. His popularity fell after Bulgaria officially entered the War, however, with money and resources now directed fully to the war effort. As Prime Minister he oversaw the occupation of Dobruja
Dobruja
Dobruja is a historical region shared by Bulgaria and Romania, located between the lower Danube river and the Black Sea, including the Danube Delta, Romanian coast and the northernmost part of the Bulgarian coast...
in 1916 with the aid of German
Germany
Germany , officially the Federal Republic of Germany , is a federal parliamentary republic in Europe. The country consists of 16 states while the capital and largest city is Berlin. Germany covers an area of 357,021 km2 and has a largely temperate seasonal climate...
General August von Mackensen
August von Mackensen
Anton Ludwig August von Mackensen , born August Mackensen, was a German soldier and field marshal. He commanded with success during the First World War and became one of the German Empire's most prominent military leaders. After the Armistice, Mackensen was interned for a year...
, although the move lost him some support from the German government as they wanted some of the territory for themselves. His government remained in office until June 1918, when the more moderate Aleksandar Malinov
Aleksandar Malinov
Aleksandar Pavlov Malinov was a leading Bulgarian politician who served as Prime Minister on three occasions. He was born in Pandakli, Bessarabia in a family of Bessarabian Bulgarians....
was recalled in the hope of brokering a favourable peace deal, with Radoslavov blamed for the failure of Bulgaria to gain full control of Northern Dobruja
Northern Dobruja
Northern Dobruja is the part of Dobruja within the borders of Romania. It lies between the lower Danube river and the Black Sea, bordered in south by Bulgarian Southern Dobruja.-Geography:...
in the Treaty of Bucharest
Treaty of Bucharest, 1918
The Treaty of Bucharest was a peace treaty which the German Empire forced Romania to sign on 7 May 1918 following the Romanian campaign of 1916-1917.-Main terms of the treaty:...
(the region being placed under joint Bulgarian, German and Austrian administration). By this point the Radoslavov government had become a by-word for corruption and subservience to Germany.

Radoslavov fled Bulgaria after the War, going into exile in Germany. In 1922 the regime of Aleksandar Stamboliyski
Aleksandar Stamboliyski
Aleksandar Stamboliyski was the prime minister of Bulgaria from 1919 until 1923. Stamboliyski was a member of the Agrarian Union, an agrarian peasant movement which was not allied to the monarchy, and edited their newspaper...
sentenced him to death in absentia for his part in the defeat. He was pardoned in 1929, the same year in which he died whilst still in exile in Berlin
Berlin
Berlin is the capital city of Germany and is one of the 16 states of Germany. With a population of 3.45 million people, Berlin is Germany's largest city. It is the second most populous city proper and the seventh most populous urban area in the European Union...
, Weimar Republic
Weimar Republic
The Weimar Republic is the name given by historians to the parliamentary republic established in 1919 in Germany to replace the imperial form of government...
, on 21 October. On 3 November, he was buried in Sofia
Sofia
Sofia is the capital and largest city of Bulgaria and the 12th largest city in the European Union with a population of 1.27 million people. It is located in western Bulgaria, at the foot of Mount Vitosha and approximately at the centre of the Balkan Peninsula.Prehistoric settlements were excavated...
.
The source of this article is wikipedia, the free encyclopedia.  The text of this article is licensed under the GFDL.