Encyclopedia
Aleksandar Stamboliyski (March 1, 1879 – June 14, 1923) was the prime minister of Bulgaria
Bulgaria
Bulgaria , officially the Republic of Bulgaria , is a parliamentary democracy within a unitary constitutional republic in Southeast Europe. The country borders Romania to the north, Serbia and Macedonia to the west, Greece and Turkey to the south, as well as the Black Sea to the east...
from 1919 until 1923. Stamboliyski was a member of the Agrarian Union
Bulgarian Agrarian People's Union
Bulgarian Agrarian National Union also tiranslated to English as Bulgarian Agrarian People's Union is a political party devoted to representing the causes of the Bulgarian peasantry. It was most powerful between 1900 and 1923. In practice, it was an agrarian movement...
, an agrarian peasant
Agrarianism
Agrarianism has two common meanings. The first meaning refers to a social philosophy or political philosophy which values rural society as superior to urban society, the independent farmer as superior to the paid worker, and sees farming as a way of life that can shape the ideal social values...
movement which was not allied to the monarchy, and edited their newspaper
Newspaper
A newspaper is a scheduled publication containing news of current events, informative articles, diverse features and advertising. It usually is printed on relatively inexpensive, low-grade paper such as newsprint. By 2007, there were 6580 daily newspapers in the world selling 395 million copies a...
. Opposed to the country's participation in the First World War
World War I
World War I , which was predominantly called the World War or the Great War from its occurrence until 1939, and the First World War or World War I thereafter, was a major war centred in Europe that began on 28 July 1914 and lasted until 11 November 1918...
and its support for the Central Powers
Central Powers
The Central Powers were one of the two warring factions in World War I , composed of the German Empire, the Austro-Hungarian Empire, the Ottoman Empire, and the Kingdom of Bulgaria...
, he was court-martialed and sentenced to life in prison in 1915. He was a supporter of the idea of a Balkan federation
Balkan Federation
The Balkan Federation was a project about the creation of a Balkan federation or confederation, based mainly on left political ideas.The concept of a Balkan federation emerged at the late 19th century from among left political forces in the region...
and identified not as a Bulgarian, but as a South Slav
South Slavs
The South Slavs are the southern branch of the Slavic peoples and speak South Slavic languages. Geographically, the South Slavs are native to the Balkan peninsula, the southern Pannonian Plain and the eastern Alps...
.

In 1918, with the defeat of Bulgaria in the war, Tsar Ferdinand abdicated in favour of his son Tsar Boris III
Boris III of Bulgaria
Boris III the Unifier, Tsar of Bulgaria , originally Boris Klemens Robert Maria Pius Ludwig Stanislaus Xaver , son of Ferdinand I, came to the throne in 1918 upon the abdication of his father, following the defeat of the Kingdom of Bulgaria during World War I...
who released Stamboliyski from prison. He joined the government in January, 1919, and was appointed prime minister on October 14 of that year. On March 20, 1920, the Agrarian Union won national elections and Stamboliyski was confirmed as prime minister.

During his term in office, Stamboliyski took the unpopular measures of complying with the terms of Bulgaria's surrender. Though popular with the peasants, this antagonized the middle class and military. Many considered him to be a virtual dictator. He was ousted in a military coup on June 9, 1923. He attempted to raise a rebellion against the new government, but was captured by the military, tortured and killed.

Born to a farmer
Farmer
A farmer is a person engaged in agriculture, who raises living organisms for food or raw materials, generally including livestock husbandry and growing crops, such as produce and grain...
, Aleksandar Stamboliyski spent his childhood in the Bulgarian village of Slavovitsa, the same village where he would later gather several thousand insurrectionists from the region and advance against the town of Pazardzhik
Pazardzhik
Pazardzhik is a city situated along the banks of the Maritsa river, Southern Bulgaria. It is the capital of Pazardzhik Province and centre for the homonymous Pazardzhik Municipality...
. However, before this grand counter-insurgence was to transpire, Stamboliyski had to work himself up the ranks of the nation’s political scene as the leader of the Bulgarian Agrarian People's Union
Bulgarian Agrarian People's Union
Bulgarian Agrarian National Union also tiranslated to English as Bulgarian Agrarian People's Union is a political party devoted to representing the causes of the Bulgarian peasantry. It was most powerful between 1900 and 1923. In practice, it was an agrarian movement...
. Although successful in his political ambition of acquiring the highest political office of the state, the unstable political atmosphere of Bulgaria in the early inter-war years ultimately led to Stamboliyski’s demise. 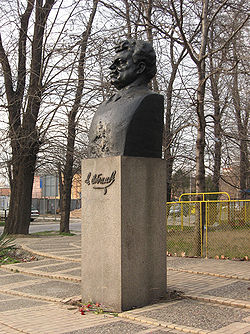 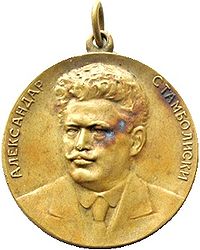 Until the early 1900s, Bulgaria was primarily a land of small, independent peasant farmers. The Bulgarian Agrarian National Union
Bulgarian Agrarian National Union
Bulgarian Agrarian National Union also tiranslated to English as Bulgarian Agrarian People's Union is a political party devoted to representing the causes of the Bulgarian peasantry. It was most powerful between 1900 and 1923. In practice, it was an agrarian movement...
, or BANU, emerged in 1899, due to grievances against the monarchial government in light of the low standard of living facing the agrarian peasants of Bulgaria at the turn of the twentieth century. By 1911, as the leader of the BANU, Stamboliyski was the most notorious anti-monarchist and head of the opposition to Tsar Ferdinand of Bulgaria. Bulgaria was the first defeated state of the First World War, and the regime, composed primarily of the state’s bourgeoisie members, tried to escape the national disgrace without punishment. It attempted to consolidate its domination by attracting into the administration the party with the largest membership — the BANU. On September 25, 1918, in order to gain the BANU’s acceptance, the regime was forced to release a number of political detainees, most notably Aleksandar Stamboliyski, who had been sentenced to life in prison after his meeting with Tsar Ferdinand to protest the war effort on 18 September 1915; two weeks before Bulgaria entered World War I on the side of the Central Powers.
When the regime released Stamboliyski from prison, it did so with the hope that he would contain the growing unrest within the army. Although it is unclear if he was willing, or even able, to quell the army, it is indisputable that, with the influence of fellow agrarian party activist Rayko Daskalov
Rayko Daskalov
Rayko Ivanov Daskalov was a Bulgarian interwar politician of the Bulgarian Agrarian People's Union . One of the chief leaders of the republican Vladaya Uprising organised by deserted Bulgarian Army troops in 1918 against the government, from 1919 to 1923 Daskalov was a prominent member of the...
, Stamboliyski soon faced another arrest order from the crown after Bulgaria was declared a Republic for the people on 27 September 1918, under the printed Declaration of Aleksandûr Stamboliyski. In the Declaration, which Stamboliyski is rumored to have been surprised to discover his name printed on the bottom, the tyrannical regime of Tsar Ferdinand was denounced and told to surrender to the new provisional government headed by the BANU leader.


The Radomir Rebellion of 1918

A rebellion, centered to the west of Sofia in the town of Radomir
Radomir
Radomir is a town in the Pernik Province of Bulgaria with a population of about 16,503. It is located at .- History :The town was first mentioned in a 15th-century source as Uradmur. The current form appears for the first time in a source from 1488...
, was organized by Stamboliyski’s supporters and threatened to develop into a national revolution. However, the movement for a new, agrarian republic was quickly eliminated due to several factors and was left without the sufficient means to bring about the change it desired. Lasting from only 28 September until 2 October, the rebellion was very short-lived and led to many arrested and executions. Unlike many of his supporters, Stamboliyski was able to escape the fate of imprisonment or execution and, instead, went into hiding until he was to re-surface in the political arena during the reign of Tsar Boris III. The movement, however, could not be considered a total failure by the Agrarian Union as it was successful in eliminating the rule of Tsar Ferdinand, who fled Bulgaria by train on 3 October 1918, in the wake of Allied occupation. Ferdinand was to be succeeded by his son, Boris III, with the approval of the Allied Powers.

After Tsar Boris III took the throne, the emerging political factions in Bulgaria were the Agrarians, the Socialists, and the Macedonian extremists. However, due to the loss of the territory of Macedonia immediately following Bulgaria’s surrender to the Allied forces, the Macedonian faction fell out of contention leaving the Agrarian and Communists factions struggling for political supremacy. As the general election of 1919 approached, Stamboliyski came out of hiding and won the election of prime minister of the new coalition cabinet. However, because the election was so close, Stamboliyski was forced to form a government coalition between the agrarians and the left-wing parliamentary parties. By March 1920, however, Stamboliyski was able to form a solely BANU government with another decisive election victory and a tactical manipulation of the parliamentary system. From his complete acquisition of power in March 1920, until his death on 14 June 1923, Stamboliyski ruled Bulgaria with a decisive force and caused many to remember him as a “virtual dictator.”

Stamboliyski’s government immediately faced pressures from the left and right as well as national problems such as food shortages, general strikes, and a great flu epidemic. His goal was to transform the political, economic, and social structures of the state. He aimed at establishing the absolute rule of the peasant, which composed nearly three-fourths of the population of Bulgaria during his era. Part of his objective was to offer each member of the dominant group an equitable distribution of property and access to the cultural and welfare facilities in all villages. The BANU organizations were to play a vital role in linking the peasant economy to the national and international markets. Stamboliyski founded the BANU Orange Guard, a peasant army that both protected him and carried out his agrarian reforms. In foreign policy, Stamboliyski abided by the terms he helped set in the peace treaty signed at Neuilly-sur-Seine in November 1919, which was eventually exploited by the extreme right factions of Bulgaria as he failed to lessen the outstanding reparations payments until 1923. Stamboliyski rejected territorial expansion and aimed at forming a Balkan federation of agrarian states. His administration was successful in bringing out land redistribution legislation, creating maximum property holding regulations. It also increased the vocational element in education, especially in rural areas. However, Stamboliyski never settled the Macedonian problem and failed to maintain a strong standing army (which was one of the provisions of the Neuilly-sur-Seine treaty).


The town of Stamboliyski