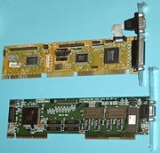 Encyclopedia
The VESA Local Bus was mostly used in personal computers. VESA
VESA
VESA is an international standards body for computer graphics founded in 1989 by NEC Home Electronics and eight other video display adapter manufacturers.VESA's initial goal was to produce a standard for 800×600 SVGA resolution video displays...
(Video Electronics Standards Association) Local Bus worked alongside the ISA
Industry Standard Architecture
Industry Standard Architecture is a computer bus standard for IBM PC compatible computers introduced with the IBM Personal Computer to support its Intel 8088 microprocessor's 8-bit external data bus and extended to 16 bits for the IBM Personal Computer/AT's Intel 80286 processor...
bus; it acted as a high-speed conduit for memory-mapped I/O
Memory-mapped I/O
Memory-mapped I/O and port I/O are two complementary methods of performing input/output between the CPU and peripheral devices in a computer...
and DMA
Direct memory access
Direct memory access is a feature of modern computers that allows certain hardware subsystems within the computer to access system memory independently of the central processing unit ....
, while the ISA bus handled interrupts and port-mapped I/O.

In the early 1990s, the I/O
I/O
I/O may refer to:* Input/output, a system of communication for information processing systems* Input-output model, an economic model of flow prediction between sectors...
bandwidth of the ISA bus became an issue, mainly for graphics cards, but also for mass storage devices. IBM's attempt at producing a successor standard, the MCA
Micro Channel architecture
Micro Channel Architecture was a proprietary 16- or 32-bit parallel computer bus introduced by IBM in 1987 which was used on PS/2 and other computers through the mid 1990s.- Background :...
failed due to its proprietary nature, while the more accepted EISA
Extended Industry Standard Architecture
The Extended Industry Standard Architecture is a bus standard for IBM PC compatible computers...
standard didn't offer enough of an improvement over standard ISA for it to be generally considered worthwhile. For a short time, hardware producers included proprietary implementations of local bus
Local bus
In computer science, a local bus is a computer bus that connects directly, or almost directly, from the CPU to one or more slots on the expansion bus. The significance of direct connection to the CPU is avoiding the bottleneck created by the expansion bus, thus providing fast throughput...
ses on their motherboards which were only compatible with hardware from the same manufacturer. This led to the VESA
VESA
VESA is an international standards body for computer graphics founded in 1989 by NEC Home Electronics and eight other video display adapter manufacturers.VESA's initial goal was to produce a standard for 800×600 SVGA resolution video displays...
consortium defining the VLB standard in 1992.

A VLB slot itself was an extension of an existing ISA slot. Indeed, either a VLB or an ISA card could be plugged into a VLB slot. The extended portion was usually colored a distinctive brown. This made VLB cards quite long, reminiscent of the ISA expansion cards from the old XT
IBM Personal Computer XT
The IBM Personal Computer XT, often shortened to the IBM XT, PC XT, or simply XT, was IBM's successor to the original IBM PC. It was released as IBM Machine Type number 5160 on March 8, 1983, and came standard with a hard drive...
days (which were long because of low component density and high chip count requiring more printed circuit board space, rather than because of a long edge connector
Edge connector
An edge connector is the portion of a printed circuit board consisting of traces leading to the edge of the board that are intended to plug into a matching socket. The edge connector is a money-saving device because it only requires a single discrete female connector , and they also tend to be...
.) The addition looked similar to the PCI slot and, indeed, used the same connector type, only shorter.

The VESA Local Bus was designed as a stopgap solution to the problem of the ISA bus's limited bandwidth
Bandwidth (computing)
In computer networking and computer science, bandwidth, network bandwidth, data bandwidth, or digital bandwidth is a measure of available or consumed data communication resources expressed in bits/second or multiples of it .Note that in textbooks on wireless communications, modem data transmission,...
. VLB had several flaws that served to limit its useful life substantially:

Despite these problems, the VESA Local Bus was very commonplace on 486 motherboards. Probably a majority of 486-based systems had a VESA Local Bus video card, although early 486 systems never had VLB slots, as VLB debuted years after the introduction of the 486 processor.
By 1996, the Pentium (driven by Intel's Triton chipset and PCI
Peripheral Component Interconnect
Conventional PCI is a computer bus for attaching hardware devices in a computer...
architecture) had eliminated the 80486 market and the VESA Local Bus with it. Many of the last 80486 motherboards made have PCI slots instead of (or sometimes in addition to) VLB slots. Most boards had either PCI or VLB slots alongside the still-ubiquitous ISA slots. So-called "VIP" (VESA/ISA/PCI) boards, with all three slot types, were unusual. 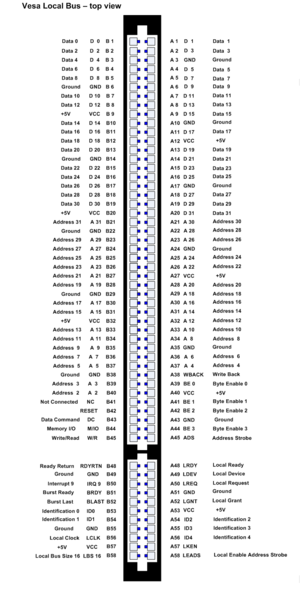