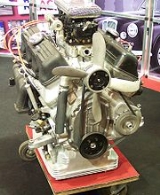 Overview
A V6 engine is a V engine
V engine
A V engine, or Vee engine is a common configuration for an internal combustion engine. The cylinders and pistons are aligned, in two separate planes or 'banks', so that they appear to be in a "V" when viewed along the axis of the crankshaft...
with six cylinder
Cylinder (engine)
A cylinder is the central working part of a reciprocating engine or pump, the space in which a piston travels. Multiple cylinders are commonly arranged side by side in a bank, or engine block, which is typically cast from aluminum or cast iron before receiving precision machine work...
s mounted on the crankcase
Crankcase
In an internal combustion engine of the reciprocating type, the crankcase is the housing for the crankshaft. The enclosure forms the largest cavity in the engine and is located below the cylinder, which in a multicylinder engine are usually integrated into one or several cylinder blocks...
in two banks of three cylinders, usually set at either a right angle or an acute angle to each other, with all six piston
Piston
A piston is a component of reciprocating engines, reciprocating pumps, gas compressors and pneumatic cylinders, among other similar mechanisms. It is the moving component that is contained by a cylinder and is made gas-tight by piston rings. In an engine, its purpose is to transfer force from...
s driving a common crankshaft
Crankshaft
The crankshaft, sometimes casually abbreviated to crank, is the part of an engine which translates reciprocating linear piston motion into rotation...
. It is the second most common engine configuration in modern cars after the inline four
Straight-4
The inline-four engine or straight-four engine is an internal combustion engine with all four cylinders mounted in a straight line, or plane along the crankcase. The single bank of cylinders may be oriented in either a vertical or an inclined plane with all the pistons driving a common crankshaft....
.

The V6 is one of the most compact engine configurations, shorter than the straight 4 and in many designs narrower than the V8 engine
V8 engine
A V8 engine is a V engine with eight cylinders mounted on the crankcase in two banks of four cylinders, in most cases set at a right angle to each other but sometimes at a narrower angle, with all eight pistons driving a common crankshaft....
, and is well suited to the popular transverse engine
Transverse engine
A transverse engine is an engine mounted in a vehicle so that the engine's crankshaft axis is perpendicular to the long axis of the vehicle. Many modern front wheel drive vehicles use this engine mounting configuration...
front-wheel drive
Front-wheel drive
Front-wheel drive is a form of engine/transmission layout used in motor vehicles, where the engine drives the front wheels only. Most modern front-wheel drive vehicles feature a transverse engine, rather than the conventional longitudinal engine arrangement generally found in rear-wheel drive and...
layout.

Hi all is it a common problem for the jackaroo 3.2 litre to devalope really bad i dont know if it is tappets or really noisy lifters and if so is ther...

Hi all is it a common problem for the jackaroo 3.2 litre to devalope really bad i dont know if it is tappets or really noisy lifters and if so is ther...