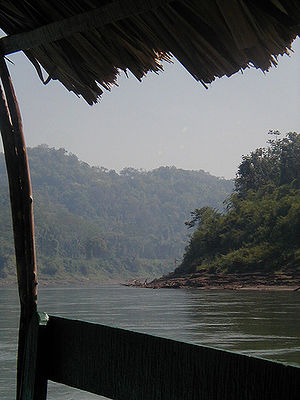 The Usumacinta River is a river
River
A river is a natural watercourse, usually freshwater, flowing towards an ocean, a lake, a sea, or another river. In a few cases, a river simply flows into the ground or dries up completely before reaching another body of water. Small rivers may also be called by several other names, including...
in southeastern Mexico
Mexico
The United Mexican States , commonly known as Mexico , is a federal constitutional republic in North America. It is bordered on the north by the United States; on the south and west by the Pacific Ocean; on the southeast by Guatemala, Belize, and the Caribbean Sea; and on the east by the Gulf of...
and northwestern Guatemala
Guatemala
Guatemala is a country in Central America bordered by Mexico to the north and west, the Pacific Ocean to the southwest, Belize to the northeast, the Caribbean to the east, and Honduras and El Salvador to the southeast...
. It is formed by the junction of the Pasión River
Pasión River
The Pasión River is a river located in the northern lowlands region of Guatemala. The river is fed by a number of upstream tributaries whose sources lie in the hills of Alta Verapaz. These flow in a general northerly direction to form the Pasión, which then tends westwards to meet up with the...
, which arises in the Sierra de Santa Cruz
Sierra de Santa Cruz (Guatemala)
The Sierra de Santa Cruz is a small mountain range in eastern Guatemala. It is situated north of Lake Izabal, in the department of Izabal. The mountain range has a south-west to north-east orientation, and is approximately 55 km long and 13 km wide....
(in Guatemala) and the Salinas River
Salinas River (Guatemala)
The Salinas is a river in Guatemala. The river is called Chixoy River from its sources in the highlands of Huehuetenango and El Quiché until it reaches the Chixoy hydroelectric dam , where the Río Salama and Rio Carchela converge with the Río Negro...
, also known as the Chixoy, or the Negro, which descends from the Sierra Madre de Guatemala
Sierra Madre de Chiapas
Sierra Madre is a mountain range which runs northwest-southeast from the state of Chiapas in Mexico across Guatemala and into El Salvador and Honduras. Most of the volcanoes of Guatemala are a part of this range.A narrow coastal plain lies south the range, between the Sierra Madre and the Pacific...
. It defines part of the border between Guatemala and the Mexican state of Chiapas
Chiapas
Chiapas officially Estado Libre y Soberano de Chiapas is one of the 31 states that, with the Federal District, comprise the 32 Federal Entities of Mexico. It is divided in 118 municipalities and its capital city is Tuxtla Gutierrez. Other important cites in Chiapas include San Cristóbal de las...
, then continues its northwesterly course, meandering through the Mexican state of Tabasco
Tabasco
Tabasco officially Estado Libre y Soberano de Tabasco is one of the 31 states which, with the Federal District, comprise the 32 Federal Entities of Mexico. It is divided in 17 municipalities and its capital city is Villahermosa....
to the Gulf of Mexico
Gulf of Mexico
The Gulf of Mexico is a partially landlocked ocean basin largely surrounded by the North American continent and the island of Cuba. It is bounded on the northeast, north and northwest by the Gulf Coast of the United States, on the southwest and south by Mexico, and on the southeast by Cuba. In...
. The total length of the river, including the Salinas, Chixoy, Negro rivers in Guatemala is approximately 1000 km (621.4 mi). It is the only visible natural boundary separating the Yucatán Peninsula
Yucatán Peninsula
The Yucatán Peninsula, in southeastern Mexico, separates the Caribbean Sea from the Gulf of Mexico, with the northern coastline on the Yucatán Channel...
from Mexico.

The river and its tributaries were important trade routes for the ancient Maya civilization
Maya civilization
The Maya is a Mesoamerican civilization, noted for the only known fully developed written language of the pre-Columbian Americas, as well as for its art, architecture, and mathematical and astronomical systems. Initially established during the Pre-Classic period The Maya is a Mesoamerican...
. Yaxchilan
Yaxchilan
Yaxchilan is an ancient Maya city located on the bank of the Usumacinta River in what is now the state of Chiapas, Mexico. In the Late Classic Period Yaxchilan was one of the most powerful Maya states along the course of the Usumacinta, with Piedras Negras as its major rival...
and Piedras Negras, two of the most powerful cities of the Maya Classic Period, lie along its banks.

Before roads, such as the Border Highway
Mexican Federal Highway 307
Mexican Federal Highway 307 is a Federal Highway of Mexico. It connects Cancún, Quintana Roo to Chetumal, Palenque, and Chiapas state, La Trinitaria....
constructed by the Mexican Government in the early 1990s, penetrated the jungle, the river was the only means of travel in this region. Huge trunks of hardwood
Hardwood
Hardwood is wood from angiosperm trees . It may also be used for those trees themselves: these are usually broad-leaved; in temperate and boreal latitudes they are mostly deciduous, but in tropics and subtropics mostly evergreen.Hardwood contrasts with softwood...
trees were floated downriver to the state of Tabasco
Tabasco
Tabasco officially Estado Libre y Soberano de Tabasco is one of the 31 states which, with the Federal District, comprise the 32 Federal Entities of Mexico. It is divided in 17 municipalities and its capital city is Villahermosa....
.

In the 1980s, many Guatemalan refugee
Refugee
A refugee is a person who outside her country of origin or habitual residence because she has suffered persecution on account of race, religion, nationality, political opinion, or because she is a member of a persecuted 'social group'. Such a person may be referred to as an 'asylum seeker' until...
s fled across the river to relative safety in Mexico. Other groups of refugees and Guatemalan guerrillas formed the so-called CPR communities in the jungle on the Guatemalan shores, hiding from the government until the peace accords of the nineties.

Frans and Trudi Blom first brought the idea of conservation to the watershed in the 1950s by proposing that a section of the Selva Lacandona be reserved for the Lacandon
Lacandon
The Lacandon are one of the Maya peoples who live in the jungles of the Mexican state of Chiapas, near the southern border with Guatemala. Their homeland, the Lacandon Jungle, lies along the Mexican side of the Usumacinta River and its tributaries. The Lacandon are one of the most isolated and...
Maya. Their idea was as much the preservation of culture as of habitat, and this principle – that indigenous integrity and habitat are inextricably linked in the watershed – should help guide any future conservation planning. Conservationists working in the region, such as Nacho March, Ron Nigh, Fernando Ochoa, Roan Balas McNab and others, have all acknowledged and upheld the principle in their work.

The first large hydroelectric project on the Usumacinta was proposed in the 1980s, and would have stretched all the way up the Pasion and Lacantun tributaries, flooding Piedras Negras and Yaxchilan
Yaxchilan
Yaxchilan is an ancient Maya city located on the bank of the Usumacinta River in what is now the state of Chiapas, Mexico. In the Late Classic Period Yaxchilan was one of the most powerful Maya states along the course of the Usumacinta, with Piedras Negras as its major rival...
, among other known and unknown Maya sites. At that time, the Guatemalan shore was held by rebels, whose presence discouraged illegal logging, poaching, and looting. It also discouraged dam engineers. In 1985 Jefferey Wilkerson's groundbreaking article in National Geographic brought the river and its glories to widespread public consciousness for the first time. Additionally, the Guatemalan journalist Victor Perera wrote about the river in The Nation and in his books, The Last Lords of Palenque and Unfinished Conquest, and Jan de Vos
Jan de Vos (historian)
Jan de Vos van Gerven was a Belgian historian, who lived in Mexico from 1973 until his death in 2011 .In 1995 he became guest-advisor to the Zapatista Army of National Liberation during the peace talks between the EZLN and the Mexican Government.Jan de Vos was born in Antwerp, Belgium, in 1936. He...
chronicled the region in his magisterial series of histories. Ultimately the hydro project failed under the weight of its own disincentives: siltation, geology, seismic activity, distance from markets, politics, etc., but the outcry from conservationists, archeologists, writers, and the public helped. It also established a pattern.

A thriving seasonal business in wilderness tourism began after the Wilkerson article. The river and its environs became a favorite destination of river travelers, amateur Mayanists and archaeologists, birders and wildlife tourists.

Carlos Salinas de Gortari proposed a smaller but still monumental hydro project in 1990, and completed the periferico surrounding the Montes Azules reserve. Articles in the New York Times, and op-ed pieces by Homero Aridjis
Homero Aridjis
Homero Aridjis is a Mexican poet, novelist, environmental activist, journalist and diplomat known for his independence.-Family and Early Life:...
suggesting a binational reserve for the area, helped defeat this incarnation of the idea.

In the late nineties a consortium of scientists, and government and non-governmental organizations met in San Cristóbal de las Casas
San Cristóbal de las Casas
San Cristóbal de las Casas also known as it's native Tsotsil name, Jovel is a city and municipality located in the Central Highlands region of the Mexican state of Chiapas...
, under the auspices of the Wildlife Conservation Society
Wildlife Conservation Society
The Wildlife Conservation Society based at the Bronx Zoo was founded in 1895 as the New York Zoological Society and currently manages some of wild places around the world, with over 500 field conservation projects in 60 countries, and 200 scientists on staff...
and the University of Florida
University of Florida
The University of Florida is an American public land-grant, sea-grant, and space-grant research university located on a campus in Gainesville, Florida. The university traces its historical origins to 1853, and has operated continuously on its present Gainesville campus since September 1906...
, to identify the extent and types of habitat remaining the region, and to draw maps of the watershed. The conference addressed many of the jurisdictional and administrative questions that still bedevil the idea.

The Zapatista Rebellion in 1994 and 1995, and the Guatemalan peace accords in 1996, reshaped the political lines in the watershed. As a direct consequence, and with the dramatic fall of the peso, bandits began robbing raft trips, ending wilderness travel in the corridor. One of the most promising tourist activities, with the least potential impact and the most possibility for helping conservation, archaeology, and cultural preservation, ended. Illegal activity of all types took over the corridor.

The Mexican army, which pervaded the Zapatista region, had little effect on river crime, and may have abetted it. In Guatemala, the absence of the expelled CPR communities, which had helped keep the selva safe and secure, now left it open to invasion, illegal logging, smuggling of immigrants, arms, artifacts, and drugs. (Many members of those communities now work as Defensores, but their numbers are few, and they are poorly paid.) The region continued in a state of low-grade terror and occupation for ten years.