Encyclopedia
Urban density is a term used in urban planning
Urban planning
Urban planning incorporates areas such as economics, design, ecology, sociology, geography, law, political science, and statistics to guide and ensure the orderly development of settlements and communities....
and urban design
Urban design
Urban design concerns the arrangement, appearance and functionality of towns and cities, and in particular the shaping and uses of urban public space. It has traditionally been regarded as a disciplinary subset of urban planning, landscape architecture, or architecture and in more recent times has...
to refer to the number of people inhabiting a given urbanized area. As such it is to be distinguished from other measures of population density
Population density
Population density is a measurement of population per unit area or unit volume. It is frequently applied to living organisms, and particularly to humans...
. Urban density is considered an important factor in understanding how cities function. Research related to urban density occurs across diverse areas, including economics, health, innovation, psychology and geography as well as sustainability
Sustainability
Sustainability is the capacity to endure. For humans, sustainability is the long-term maintenance of well being, which has environmental, economic, and social dimensions, and encompasses the concept of union, an interdependent relationship and mutual responsible position with all living and non...
. 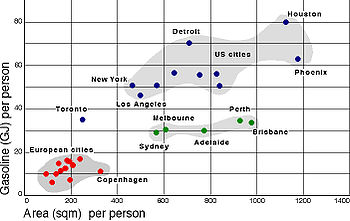 It is commonly asserted that higher density cities are more sustainable than low density cities. Much planning theory
Planning Theory
Planning Theory is a peer-reviewed academic journal that publishes papers in the field of planning and development. The journal's editor-in-Chief is Michael Gunder...
, particularly in North America, the UK, Australia and New Zealand has been developed premised on raising urban densities, such as New Urbanism
New urbanism
New Urbanism is an urban design movement, which promotes walkable neighborhoods that contain a range of housing and job types. It arose in the United States in the early 1980s, and has gradually continued to reform many aspects of real estate development, urban planning, and municipal land-use...
, Transit-oriented development
Transit-oriented development
A transit-oriented development is a mixed-use residential or commercial area designed to maximize access to public transport, and often incorporates features to encourage transit ridership...
, and Smart growth
Smart growth
Smart growth is an urban planning and transportation theory that concentrates growth in compact walkable urban centers to avoid sprawl and advocates compact, transit-oriented, walkable, bicycle-friendly land use, including neighborhood schools, complete streets, and mixed-use development with a...
.

However, the link between urban density and aspects of sustainability
Sustainability
Sustainability is the capacity to endure. For humans, sustainability is the long-term maintenance of well being, which has environmental, economic, and social dimensions, and encompasses the concept of union, an interdependent relationship and mutual responsible position with all living and non...
remains a contested area of planning theory. Many experts on sustainable urbanism, including prominent urban designer Jan Gehl
Jan Gehl
Jan Gehl is a Danish architect and urban design consultant based in Copenhagen and whose career has focused on improving the quality of urban life by re-orienting city design towards the pedestrian and cyclist.-Biography:...
, argue that low-density, dispersed cities are unsustainable as they are automobile dependent
Automobile dependency
Automobile dependency is a term coined by Professors Peter Newman and Jeff Kenworthy to capture the predicament of most cities in the United States, Canada, Australia and New Zealand, and to a lesser extent, large cities in Europe....
. A minority, such as Randy O'Toole, author of Gridlock and a senior fellow at the Cato Institute, counter that raising densities results in more expensive real estate, greater road congestion and more air pollution. At a broader level though, there is evidence to indicate a strong negative correlation between the total energy consumption of a city and its overall urban density, i.e. the lower the density, the more energy consumed.

Urban density is a very specific measurement of the population of an urbanized area, excluding non-urban land-uses. Non-urban uses include regional open space, agriculture and water-bodies.

There are a variety of other ways of measuring the density of urban areas: