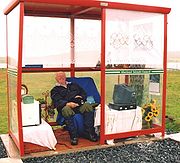 The Unst Bus Shelter, also known as Bobby's Bus Shelter, is a famous bus shelter
Shelter
Shelter is a basic architectural structure or building that provides cover. The word may also refer to:-Places:*Port Shelter, Hong Kong*Shelter Bay , various locations*Shelter Cove , various locations...
and bus stop
Bus stop
A bus stop is a designated place where buses stop for passengers to board or leave a bus. These are normally positioned on the highway and are distinct from off-highway facilities such as bus stations. The construction of bus stops tends to reflect the level of usage...
near the village of Baltasound
Baltasound
Baltasound is the largest settlement on the island of Unst in Shetland. Unst is the most northerly inhabited island in the United Kingdom. The village lies halfway along the island's east coast on a sheltered bay called Balta Sound....
, on Unst
Unst
Unst is one of the North Isles of the Shetland Islands, Scotland. It is the northernmost of the inhabited British Isles and is the third largest island in Shetland after the Mainland and Yell. It has an area of .Unst is largely grassland, with coastal cliffs...
, Shetland. It is maintained by the Shetland Islands Council
Shetland Islands Council
The Shetland Islands Council is the local authority for Shetland. It was established by the Local Government Act 1973 and is the successor to the former Lerwick Town Council and Zetland County Council...
.

It is located on the main road along Unst - the A968 - which runs between Belmont
Belmont, Shetland
Belmont is a settlement and ferry terminal in southern Unst in the Shetland Islands. The ferry crosses from here to Gutcher in Yell and to Hamars Ness in Fetlar....
and Haroldswick
Haroldswick
Haroldswick or Harold's Wick , is on Unst, Shetland Islands, and is one of the most northerly settlements in the British Isles.-History:...
.

The shelter is equipped with a sofa, a television, a computer etc. It is furnished and refurbished each year by local residents with a sofa, television, computer and other home comforts. The bus shelter is named after a child who used to cycle to the shelter in the mornings to catch the bus to school. The local council had plans to remove the bus shelter, but after he sent them a letter asking them not to and explaining that the shelter is where he kept his bike while at school, the council left it there and furnished it. Every year, the shelter is redecorated in accordance with what is going on in Bobby's life. In 2009 the shelter was decorated in pink to represent the fact that Bobby was working for a Breast Cancer charity.