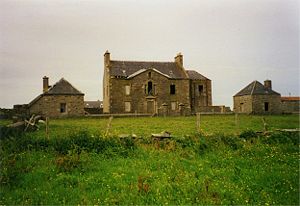 Belmont is a settlement and ferry terminal in southern Unst
Unst
Unst is one of the North Isles of the Shetland Islands, Scotland. It is the northernmost of the inhabited British Isles and is the third largest island in Shetland after the Mainland and Yell. It has an area of .Unst is largely grassland, with coastal cliffs...
in the Shetland Islands
Shetland Islands
Shetland is a subarctic archipelago of Scotland that lies north and east of mainland Great Britain. The islands lie some to the northeast of Orkney and southeast of the Faroe Islands and form part of the division between the Atlantic Ocean to the west and the North Sea to the east. The total...
. The ferry crosses from here to Gutcher
Gutcher
Gutcher is a settlement on the northeast coast of Yell in the Shetland islands. From here, rollon/roll off ferry services to Belmont on Unst and Hamars Ness on Fetlar operate. The settlement has a harbour, and a post office which doubles as a Bed and Breakfast...
in Yell and to Hamars Ness
Hamars Ness
Hamars Ness is a headland on the island of Fetlar in Shetland. The name is from the Old Norse Hamarsnes meaning "craggy headland". A ro-ro ferry is operated from here, which links Fetlar to the Shetland Mainland, and to the island of Unst. Hamars Ness is to the north of Fetlar's main village of...
in Fetlar
Fetlar
Fetlar is one of the North Isles of Shetland, Scotland, with a population of 86 at the time of the 2001 census. Its main settlement is Houbie on the south coast, home to the Fetlar Interpretive Centre...
.