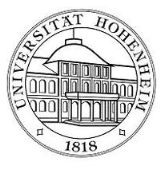 Encyclopedia
The University of Hohenheim is a university
University
A university is an institution of higher education and research, which grants academic degrees in a variety of subjects. A university is an organisation that provides both undergraduate education and postgraduate education...
in Stuttgart
Stuttgart
Stuttgart is the capital of the state of Baden-Württemberg in southern Germany. The sixth-largest city in Germany, Stuttgart has a population of 600,038 while the metropolitan area has a population of 5.3 million ....
, Germany
Germany
Germany , officially the Federal Republic of Germany , is a federal parliamentary republic in Europe. The country consists of 16 states while the capital and largest city is Berlin. Germany covers an area of 357,021 km2 and has a largely temperate seasonal climate...
. Founded in 1818 it is Stuttgart's oldest university and one of Germany's leading universities both in agricultural sciences and economics.

The University Hohenheim was co-founder of the Euroleague for Life Sciences (ELLS) which was established in 2001. This university life sciences network presently includes the following members:


Main fields of co-operation in ELLS are: