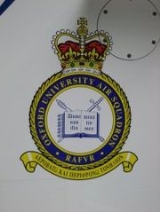 Encyclopedia
University Air Squadrons are training units of the Royal Air Force
Royal Air Force
The Royal Air Force is the aerial warfare service branch of the British Armed Forces. Formed on 1 April 1918, it is the oldest independent air force in the world...
which primarily provide basic flying training, force development and adventurous training to undergraduate students at British universities. These units exist to provide a taste of life in the Service and give experience to their members to take up a career as an officer in one of the RAF's many branches.

Members are expected to attend training nights, usually on a weekly basis, as well as attending several annual training camp. The flying syllabus of 31 sorties loosely follows Elementary Flying Training (EFT), and allows a student to do approximately ten to fifteen hours of flying per year. This is supplemented with ground training, and adventurous training both in this country and abroad.

Just prior to World War II
World War II
World War II, or the Second World War , was a global conflict lasting from 1939 to 1945, involving most of the world's nations—including all of the great powers—eventually forming two opposing military alliances: the Allies and the Axis...
the squadrons were an important source of pilots for the RAF during the Battle of Britain
Battle of Britain
The Battle of Britain is the name given to the World War II air campaign waged by the German Air Force against the United Kingdom during the summer and autumn of 1940...
. Cadets who were already members of the RAFVR were called up for active service in the middle of studying for their degrees.

Most UAS training is a cut down version of EFT and focuses on training the student to various levels of solo standard.

The Core UAS Flying Syllabus is as follows;

Successful completion of the Core Syllabus qualifies the student pilot for the award of the Preliminary Flying Badge, or 'Budgie Wings' as they are sometimes called.

For those Officer Cadets who finish the Core syllabus with time remaining on the squadron, an advanced syllabus has recently been introduced consisting of Aerobatics, Formation Flying and Low Level Navigation. There is no specific time requirement as with the core syllabus, as progression in the advanced phase is down to rate at which the student pilot is able to achieve the desired results.

Beyond flying, UASs follow a loose overall training syllabus. Though squadrons generally do not follow the syllabus as a training plan, the majority of subjects are covered at some point through the students' academic year. These can include attending Adventure Training expeditions, both overseas and within the UK, learning drill, undertaking a fieldcraft exercise such as the recent 'Strike' exercises run at RAFC Cranwell, understanding the principles of air power and developing leadership skills.

As the UAS continues to move beyond its former role of providing Elementary Flying Training to RAF Direct Entry students and UAS Students, more and more ground training opportunities are becoming available, making the UASs more suitable for Officer Cadets pursuing careers in the military other than aircrew.

UAS Officer Cadets are required to attend a minimum of one training night a week which usually involves a guest speaker taking a lecture on an aspect of the RAF or the military to develop service knowledge, and a two week period of continuous training in the summer. Most squadrons however also offer camps at Easter, Christmas, and September for Officer Cadets to undertake intensive blocs of sport, flying and adventure training.

Additionally, each student is offered a week long Summer Vacation Attachment at another RAF base, where they are seconded to an active regular RAF unit to learn more about their role.

In accordance with the overall UAS syllabus, there are many opportunities for Officer Cadets to participate in inter-UAS sports competitions and adventure training expeditions.

The UASs hold annual sporting competitions such as;


Additionally, there are frequent squadron expeditions in areas such as the Lake District
Lake District
The Lake District, also commonly known as The Lakes or Lakeland, is a mountainous region in North West England. A popular holiday destination, it is famous not only for its lakes and its mountains but also for its associations with the early 19th century poetry and writings of William Wordsworth...
, Force Development Training Centre Fairbourne, and overseas in countries such as Italy, Spain and Canada. These 'expeds' can include all manner of AT, such as mountain biking, rock climbing, abseiling, white water rafting, dog sledding, coasteering, gorge walking, canoeing, and many more.


Units and base locations