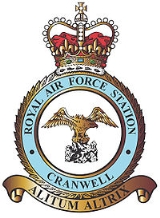 Overview
RAF Cranwell is a Royal Air Force
Royal Air Force
The Royal Air Force is the aerial warfare service branch of the British Armed Forces. Formed on 1 April 1918, it is the oldest independent air force in the world...
station in Lincolnshire
Lincolnshire
Lincolnshire is a county in the east of England. It borders Norfolk to the south east, Cambridgeshire to the south, Rutland to the south west, Leicestershire and Nottinghamshire to the west, South Yorkshire to the north west, and the East Riding of Yorkshire to the north. It also borders...
close to the village of Cranwell
Cranwell
Cranwell is a village situated in the North Kesteven district of Lincolnshire. It is part of the Civil Parish of Cranwell and Byard's Leap and is located 3.95 miles north-north-west of Sleaford and 16.3 miles south-east of the county town of Lincoln...
, near Sleaford
Sleaford
Sleaford is a town in the North Kesteven district of Lincolnshire, England. It is located thirteen miles northeast of Grantham, seventeen miles west of Boston, and nineteen miles south of Lincoln, and had a total resident population of around 14,500 in 6,167 households at the time...
. It is currently commanded by Group Captain Dave Waddington. The main building of RAF Cranwell is noted for its distinctive dome, visible from most of the surrounding roads.
The history of military aviation at Cranwell goes back to November 1915, when the Admiralty
Admiralty
The Admiralty was formerly the authority in the Kingdom of England, and later in the United Kingdom, responsible for the command of the Royal Navy...
requisitioned 2500 acres (10 km²) of land from the Earl of Bristol
Earl of Bristol
Earl of Bristol is a title that has been created twice in British history. The first creation came in the Peerage of England in 1622 in favour of the politician and diplomat John Digby who served for many years as Ambassador to Spain, and had already been created Baron Digby of Sherborne, in the...
's estate.

Where could one find documentation on a Pilot Squadron Leader Mr. Lucius Foster who was one of the USA Pilots who came over to fly for RAF before the ...
More
x