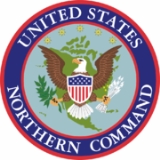 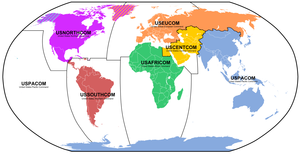 United States Northern Command (USNORTHCOM, or informally just NORTHCOM) is a Unified Combatant Command
Unified Combatant Command
A Unified Combatant Command is a United States Department of Defense command that is composed of forces from at least two Military Departments and has a broad and continuing mission. These commands are established to provide effective command and control of U.S. military forces, regardless of...
of the United States military
Military of the United States
The United States Armed Forces are the military forces of the United States. They consist of the Army, Navy, Marine Corps, Air Force, and Coast Guard.The United States has a strong tradition of civilian control of the military...
. Created on 1 October 2002 in the aftermath of the 11 September 2001 attacks, its mission is to protect the United States homeland and support local, state, and federal authorities. The support that USNORTHCOM provides to civil authorities is limited by the Posse Comitatus Act
Posse Comitatus Act
The Posse Comitatus Act is an often misunderstood and misquoted United States federal law passed on June 18, 1878, after the end of Reconstruction. Its intent was to limit the powers of local governments and law enforcement agencies from using federal military personnel to enforce the laws of...
which limits the role of the U.S. military in civil law enforcement. However, in case of national emergencies, natural or man-made, its Air Forces Northern National Security Emergency Preparedness Directorate
Air Forces Northern National Security Emergency Preparedness Directorate
The Air Forces Northern National Security Emergency Preparedness Directorate , of the First Air Force operates out of its Northern Headquarters at Tyndall Air Force Base, Florida, effective 1 January 2008....
will take charge of the situation or event.

USNORTHCOM’s Area of Responsibility (AOR) includes air, land and sea approaches and encompasses the contiguous United States
Contiguous United States
The contiguous United States are the 48 U.S. states on the continent of North America that are south of Canada and north of Mexico, plus the District of Columbia....
, Alaska
Alaska
Alaska is the largest state in the United States by area. It is situated in the northwest extremity of the North American continent, with Canada to the east, the Arctic Ocean to the north, and the Pacific Ocean to the west and south, with Russia further west across the Bering Strait...
, Canada, Mexico
Mexico
The United Mexican States , commonly known as Mexico , is a federal constitutional republic in North America. It is bordered on the north by the United States; on the south and west by the Pacific Ocean; on the southeast by Guatemala, Belize, and the Caribbean Sea; and on the east by the Gulf of...
and the surrounding water out to approximately 500 nautical miles (926 km). It also includes the Gulf of Mexico
Gulf of Mexico
The Gulf of Mexico is a partially landlocked ocean basin largely surrounded by the North American continent and the island of Cuba. It is bounded on the northeast, north and northwest by the Gulf Coast of the United States, on the southwest and south by Mexico, and on the southeast by Cuba. In...
, the Straits of Florida
Straits of Florida
The Straits of Florida, Florida Straits, or Florida Strait is a strait located south-southeast of the North American mainland, generally accepted to be between the Gulf of Mexico and the Atlantic Ocean, and between the Florida Keys and Cuba. The strait carries the Florida Current, the beginning of...
, portions of the Caribbean region to include The Bahamas
The Bahamas
The Bahamas , officially the Commonwealth of the Bahamas, is a nation consisting of 29 islands, 661 cays, and 2,387 islets . It is located in the Atlantic Ocean north of Cuba and Hispaniola , northwest of the Turks and Caicos Islands, and southeast of the United States...
, Puerto Rico
Puerto Rico
Puerto Rico , officially the Commonwealth of Puerto Rico , is an unincorporated territory of the United States, located in the northeastern Caribbean, east of the Dominican Republic and west of both the United States Virgin Islands and the British Virgin Islands.Puerto Rico comprises an...
, and the U.S. Virgin Islands
United States Virgin Islands
The Virgin Islands of the United States are a group of islands in the Caribbean that are an insular area of the United States. The islands are geographically part of the Virgin Islands archipelago and are located in the Leeward Islands of the Lesser Antilles.The U.S...
. The commander of USNORTHCOM is responsible for theater security cooperation with Canada, Mexico, and The Bahamas. NORTHCOM was recently mobilized in the wake of the BP oil spill in the Gulf of Mexico to provide air, ground, and logistical support.

USNORTHCOM headquarters has approximately 1,200 uniformed and civilian members, and few permanent forces. Forces from all branches of the U.S. military may be assigned to the Command as needed to complete its mission.

The Military Commissions Act of 2006
Military Commissions Act of 2006
The United States Military Commissions Act of 2006, also known as HR-6166, was an Act of Congress signed by President George W. Bush on October 17, 2006. Drafted in the wake of the Supreme Court's decision on Hamdan v...
lifted many restrictions placed on the military to support civilian administration by the Posse Comitatus Act
Posse Comitatus Act
The Posse Comitatus Act is an often misunderstood and misquoted United States federal law passed on June 18, 1878, after the end of Reconstruction. Its intent was to limit the powers of local governments and law enforcement agencies from using federal military personnel to enforce the laws of...
, however the US Supreme Court ruled in June 2008 that significant portions of the MCA were unconstitutional. The "John Warner Defense Authorization Act of 2007" H.R. 5122 (2006)
H.R. 5122 (2006)
H.R. 5122, also known as the John Warner National Defense Authorization Act for Fiscal Year 2007 was a bill passed in the United States Congress on September 29, 2006 and signed by President George W. Bush on October 17, 2006 becoming Public Law 109-364. House Vote - 396 Ayes with 31 Nays and 5...
effectively nullified the limits of the Insurrection Act
Insurrection Act
The Insurrection Act of 1807 is the set of laws that govern the US President's ability to deploy troops within the United States to put down lawlessness, insurrection and rebellion. The laws are chiefly contained in - . The general aim is to limit Presidential power as much as possible, relying on...
when it was passed; however, the bill was amended in 2008.

On 1 Oct. 2008, the 3rd Infantry Division (United States)’s 1st Brigade Combat Team
Brigade combat team
The brigade combat team is the basic deployable unit of maneuver in the US Army. A brigade combat team consists of one combat arms branch maneuver brigade, and its attached support and fire units. A brigade combat team is generally commanded by a colonel , but in rare instances it is commanded by...
was assigned to U.S. Northern Command, marking the first time an active unit had been given a dedicated assignment to Northern Command. The force will be known for the first year as a CBRNE Consequence Management Response Force, and will serve as an on-call federal response force for terrorist attacks and other natural or manmade emergencies and disasters.
.

Note: The National Defense Authorization Act of 2008 stipulates that at least one deputy commander of USNORTHCOM be a National Guard general officer unless the commander is already such an officer.