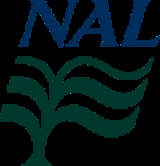 NAL was established on May 15, 1862 by the signing of the Organic Act by Abraham Lincoln
Abraham Lincoln
Abraham Lincoln was the 16th President of the United States, serving from March 1861 until his assassination in April 1865. He successfully led his country through a great constitutional, military and moral crisis – the American Civil War – preserving the Union, while ending slavery, and...
. It served as a departmental library until 1962, when the Secretary of Agriculture officially designated it as the National Agricultural Library. The first librarian, appointed in 1867, was Aaron B. Grosh
Aaron B. Grosh
Reverend Aaron Burt Grosh , a Universalist minister, was one of the seven founders of the Grange. He had a major part in the design of the Grange ritual and was also responsible for the various songs used during various celebrations of the Grange...
, one of the founders of the National Grange of the Order of Patrons of Husbandry. 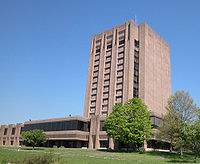 During World War II
World War II
World War II, or the Second World War , was a global conflict lasting from 1939 to 1945, involving most of the world's nations—including all of the great powers—eventually forming two opposing military alliances: the Allies and the Axis...
, the Department of Agriculture underwent reorganization to address wartime needs. The library, which had been decentralized since 1920, was consolidated into a central facility under the direction of Department Librarian Ralph R. Shaw
Ralph R. Shaw (librarian)
Ralph R. Shaw was a librarian, a publisher, and an innovator in library science.He married his first wife Viola Susan Leff in 1929 and married his second wife, Mary McChesney Andrews in 1969.- Scarecrow Press :...
.

On May 23, 1962, the 100th anniversary of the library's establishment, Secretary of Agriculture Orville Freeman
Orville Freeman
Orville Lothrop Freeman was an American Democratic politician who served as the 29th Governor of Minnesota from January 5, 1955 to January 2, 1961, and as the U.S. Secretary of Agriculture from 1961 to 1969 under Presidents John F. Kennedy and Lyndon B. Johnson...
officially designated the library as the National Agricultural Library, making it the third national library
National library
A national library is a library specifically established by the government of a country to serve as the preeminent repository of information for that country. Unlike public libraries, these rarely allow citizens to borrow books...
in the United States. In 1964, funds were appropriated by Congress to begin planning for a new library facility in Beltsville, Maryland on the grounds of the Beltsville Agricultural Research Center. Construction on the new facility began in 1965, and it first opened in 1969. In 2000, Secretary of Agriculture Dan Glickman
Dan Glickman
Daniel Robert "Dan" Glickman is an American businessman and politician. He served as the United States Secretary of Agriculture from 1995 until 2001, prior to which he represented the Fourth Congressional District of Kansas as a Democrat in Congress for 18 years. He was Chairman and CEO of the...
designated the building as the Abraham Lincoln Building.


Librarians of the Department of Agriculture

NAL maintains AGRICOLA (AGRICultural OnLine Access), the largest bibliographic database
Bibliographic database
A bibliographic database is a database of bibliographic records, an organized digital collection of references to published literature, including journal and newspaper articles, conference proceedings, reports, government and legal publications, patents, books, etc...
of agricultural literature in the world. It contains more than 4.1 million records for publications dating as far back as the 15th century. 78 percent of the records are for journal articles and book chapters, while 22 percent cover full-length books, journals, maps, electronic resources, and audiovisual materials. The database indexes publications from many disciplines related to agriculture, including veterinary sciences, entomology, forestry, aquaculture and fisheries, economics, food and human nutrition, and environmental sciences.

AGRICOLA originated in 1942 as the Bibliography of Agriculture, a printed index of article citation records. It was first digitized in 1970, when records were placed on magnetic tapes rather than reproducing them manually. The name was changed to AGRICOLA at this time, and the records were made available through database vendors such as Dialog and OCLC. In 1998, it became available to the general public for free on the World Wide Web.

The NAL Digital Repository http://naldr.nal.usda.gov, created in April 2006, serves as a digital archive of historical USDA documents. The repository contains over 600,000 pages of digitized texts. Publications contained in the repository include the issues of the Journal of Agricultural Research from 1913–1949 and the archives of the Yearbook of the United States Department of Agriculture dating back to 1894.

NAL also houses several specialized information centers, which provide access to comprehensive and essential information resources focusing on the specific aspects of agricultural subjects. In addition to the general reference services available at NAL, each center offers Internet access to resources enhancing information availability and dissemination. The centers have staff available to serve customers on-site as well as by phone, fax or email. The Information Centers at the National Agricultural Library include: