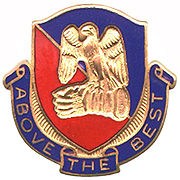 The United States Army Aviation School is located at Fort Rucker
Fort Rucker
Fort Rucker is a U.S. Army post located mostly in Dale County, Alabama, United States. It was named for a Civil War officer, Confederate General Edmund Rucker. The post is the primary flight training base for Army Aviation and is home to the United States Army Aviation Center of Excellence and...
, Alabama
Alabama
Alabama is a state located in the southeastern region of the United States. It is bordered by Tennessee to the north, Georgia to the east, Florida and the Gulf of Mexico to the south, and Mississippi to the west. Alabama ranks 30th in total land area and ranks second in the size of its inland...

In 1912 the facility was located in College Park
College Park, Maryland
College Park is a city in Prince George's County, Maryland, USA. The population was 30,413 at the 2010 census. It is best known as the home of the University of Maryland, College Park, and since 1994 the city has also been home to the "Archives II" facility of the U.S...
, Maryland.

The Army Aviation School began moving to Alabama in August 1954 and the first class began at Rucker in October.

It is where officers not only learn to fly their specific Army aircraft, but also to employ aviation assets to assist United States forces. Students usually spend 15–18 months in aviation school, learning a wide range of subjects, and finally graduating with their "wings" or Aviator's Badge. When second lieutenants arrive at Fort Rucker after graduating from their commissioning source (USMA, ROTC or OCS) they secure housing, they attend the two month Basic Officer Leadership Course (BOLC B) at Fort Rucker. Upon completion, they join the rest of their classmates, usually junior Warrant Officers, many of whom have previous enlisted experience. Before starting academics, students must complete Dunker training and Army SERE
SERE
SERE is a military acronym for Survival, Evasion, Resistance, and Escape, a program that provides military personnel, Department of Defense civilians and private military contractors with training in evading capture, survival skills and the military code of conduct...
(Survival, Evasion, Resistance and Escape) school. They move on to Junior Officer Professional Development, a short course covering Army basics, from soldier support to instruction on military law. This course is followed by BOLC B, the first half of what was previous called Aviation Branch
United States Army Aviation Branch
The Aviation Branch of the United States Army is the administrative organization within the Army responsible for doctrine, manning and configuration for all aviation units....
Officer Basic Course. Classes during this three week course are more specific to the aviation branch, including the aircraft maintenance process, general aviation doctrine, and US and foreign vehicle and aircraft identification. After BOLC B, students transition to Initial Entry Rotary Wing Aeromedical Training, or "aeromed" at the US Army School of Aviation Medicine. Here, they learn how flight affects physiology, toxicology, gravitational forces and other subjects pertaining to flight and the human body. The information taught in these classes remains testable information throughout flight school, and is asked frequently by instructor pilots (IPs).