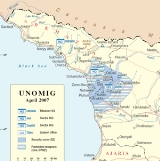 The United Nations Observer Mission in Georgia (UNOMIG) was established by United Nations Security Council Resolution 858
United Nations Security Council Resolution 858
United Nations Security Council Resolution 858, adopted unanimously on August 24, 1993, after recalling resolutions 849 and 854 and noting a ceasefire between Abkhazia and Georgia and commitments to withdraw forces, the Council established the United Nations Observer Mission in Georgia for an...
in August 1993 to verify compliance with a 27 July 1993 ceasefire agreement between the Republic of Georgia and forces in Abkhazia
Abkhazia
Abkhazia is a disputed political entity on the eastern coast of the Black Sea and the south-western flank of the Caucasus.Abkhazia considers itself an independent state, called the Republic of Abkhazia or Apsny...
with special attention given to the situation in the city of Sukhumi
Sukhumi
Sukhumi is the capital of Abkhazia, a disputed region on the Black Sea coast. The city suffered heavily during the Georgian-Abkhaz conflict in the early 1990s.-Naming:...
, Georgia. It was also to investigate reports of ceasefire violations, attempt to resolve such incidents with the parties involved, and to report to the Secretary-General of the United Nations on the implementation of its mandate. 88 military advisors were authorized to be deployed to the region. It ended on 15 June 2009, when Russia vetoed an extension of the mission. The last observers left the region on 15 July 2009.

The mission's original mandate was invalidated after renewed fighting broke out in the area in September, 1993.

UNOMIG was subsequently given an interim mandate by Security Council in November 1993 to maintain contacts with the parties involved and to monitor and report on the situation. It aimed to work towards achieving a comprehensive political settlement.

UNOMIG was to oversee the withdrawal of Georgian troops from the Kodori Valley
Kodori Valley
The Kodori Valley is a river valley in Abkhazia, Georgia's breakaway autonomous republic. The valley's upper part, populated by Svans, was the only corner of the post-1993 Abkhazia, directly controlled by the central Georgian government, which officially styles the area as Upper Abkhazia...
and thus, out of Abkhaz territory. Their patrols replaced those of Georgia in the valley. They were responsible for investigating, at the request of either party or the peacekeeping force, or on their own initiative, violations of the ceasefire agreement, and for attempting to resolve resulting disputes. Finally, they were to work towards making conditions safe for the orderly return of refugees and displaced persons.

On 10 December 1996, a United Nations office for the protection of human rights in Abkhazia was established in Tbilisi
Tbilisi
Tbilisi is the capital and the largest city of Georgia, lying on the banks of the Mt'k'vari River. The name is derived from an early Georgian form T'pilisi and it was officially known as Tiflis until 1936...
, Georgia, in accordance with Security Council Resolution 1077
United Nations Security Council Resolution 1077
United Nations Security Council Resolution 1077, adopted on October 22, 1996, after reaffirming all resolutions 937 , 1036 and 1065 on Georgia, the Council established a Human Rights Office in Sukhumi, Georgia as part of the United Nations Observer Mission in Georgia .After reiterating its...
of 22 October. It is jointly staffed by the Office of the High Commissioner for Human Rights (OHCHR) and the Organization for Security and Cooperation in Europe (OSCE). The office forms part of UNOMIG and reports to the United Nations High Commissioner for Human Rights, through the Head of the UNOMIG Mission. Though they maintain a political office in Tbilisi, their military headquarters are in Sukhumi, Abkhazia.

On 8 October 2001 a UNOMIG helicopter was shot down in Abkhazia. The perpetrators have never been found, despite repeated demands from the Security Council. In 2002, UNOMIG vigorously opposed the resumption of rail services between Sukhumi, Abkhazia and the city of Sochi
Sochi
Sochi is a city in Krasnodar Krai, Russia, situated just north of Russia's border with the de facto independent republic of Abkhazia, on the Black Sea coast. Greater Sochi sprawls for along the shores of the Black Sea near the Caucasus Mountains...
in Russia
Russia
Russia or , officially known as both Russia and the Russian Federation , is a country in northern Eurasia. It is a federal semi-presidential republic, comprising 83 federal subjects...
. 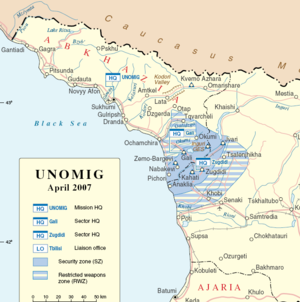 The Security Council passed another resolution on 30 July 2003, on the recommendation of Secretary-General Kofi Annan
Kofi Annan
Kofi Atta Annan is a Ghanaian diplomat who served as the seventh Secretary-General of the UN from 1 January 1997 to 31 December 2006...
, authorizing for a civilian police component of 20 officers be added to UNOMIG, in order to strengthen its capacity to carry out its mandate and assist in the return of refugees and internally displaced persons.

On 30 January 2004, again at the request of Secretary-General Annan, Security Council Resolution 1524 was passed, which extended UNOMIG's mandate until 31 July 2004.

Today, UNOMIG is concerned with security, assisting the return of the displaced and repairs of key infrastructure, such as roads and bridges. , 21 projects were at an advanced or intermediate stage and 10 others were awaiting the release of funds by donors. They have also continued to push for a political settlement to the conflict, though Secretary-General Annan has complained about the slow rate of progress. In late 2003, UNOMIG became concerned about an increase in kidnappings, murders and robberies, particularly in the Gori region. They also expressed concern about potential instability around the tenth anniversary of the end of the war.

The current chief military observer is Major General Anwar Hussain from Bangladesh. The strength of UNOMIG on 20 September 2008 stood at 134 military observers (including 12 medical personnel) and 17 police advisers.

In the mission the next vehicles are used during the patrols by the unarmed military observes:
Toyota 4Runner, Nissan Patrol (now instead of the Toyota 4Runner), NYALA RG-31 [mine protected vehicle, along the cease-fire line (CFL) and at the training areas]. The Nissan Patrol is used mainly in the Restricted Weapon Zone (RWZ) and in the Security Zone (SZ) of the mission.
In every patrol there are 2 vehicles with 4 unarmed military observers and one interpreter. The patrols are always in radio connection with the sector [Gali Sector HQ (in Abkhazia) or Zugdidi Sector HQ (in Georgia); and Sukhumi HQ (in Abkhazia)]. There are radio devices for every observers and in the vehicles because of the safety. Along the cease-fire line (CFL) there are a lot of Security Posts (SP) and Observing Posts (OP) both of the sides.

In the patrolling team only one person can be from one nation during the patrol. For example: 4 unarmed military observers are on the patrol from the next nations: Hungary, Indonesia, Germany, Argentina. This is a rule.

The mission was wound up in 2009 because of a Russian veto in the United Nations Security Council. As a result of the Russian veto, UNOMIG which had been active in the region since 1993, and had 150 personnel on the ground at the time of the veto, made up on 131 military observers and 20 police officers, saw its mandate expire on 16 June 2009 at 4am GMT. It was later announced that the withdrawal of the Mission from Abkhazia would be completed 15 July 2009, keeping in line with United Nations practice of a Mission taking up to two months to finalise its withdrawal.