Encyclopedia
The 2009 United Kingdom local elections were elections held to all 27 County Councils, three existing Unitary Authorities
Unitary authority
A unitary authority is a type of local authority that has a single tier and is responsible for all local government functions within its area or performs additional functions which elsewhere in the relevant country are usually performed by national government or a higher level of sub-national...
and five new Unitary Authorities, all in England
England
England is a country that is part of the United Kingdom. It shares land borders with Scotland to the north and Wales to the west; the Irish Sea is to the north west, the Celtic Sea to the south west, with the North Sea to the east and the English Channel to the south separating it from continental...
, on 4 June 2009. The elections were due to be held on 7 May 2009, but were delayed in order to coincide with elections to the European Parliament
European Parliament election, 2009 (United Kingdom)
The European Parliament election was the United Kingdom's component of the 2009 European Parliament election, the voting for which was held on Thursday 4 June 2009, coinciding with the 2009 local elections in England. Most of the results of the election were announced on Sunday 7 June, after...
.

The elections produced a political landscape on the map of England that was a sea of Conservative blue. The party snatched Derbyshire, Nottinghamshire, Staffordshire and Lancashire from Labour, as well as Devon and Somerset from the Liberal Democrats. The Liberal Democrats did however win a majority in Bristol. Despite the optimism for the Conservatives in seat and council gains, their share of the vote at 38% was 6% down on 2008. That said, they had a clear 10% lead over the Liberal Democrats who achieved a respectable second place on 28%. Labour, suffering from a worsening economic climate and the expenses scandal, lost all of its councils, with some authorities being swept clear of any Labour councillors at all. 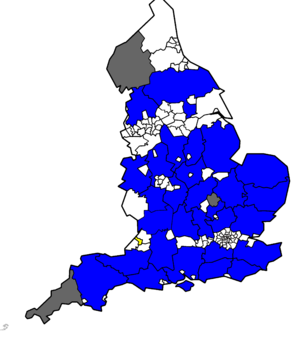 Isles of Scilly Council not included in the above figures.

All 27 English County Councils were up for election. All seats on the councils were contested at this election.

Elections were held for five new unitary authorities. All councillors were elected at this election.

A mayoral election was also due to be held in Stoke-on-Trent
Stoke-on-Trent
Stoke-on-Trent , also called The Potteries is a city in Staffordshire, England, which forms a linear conurbation almost 12 miles long, with an area of . Together with the Borough of Newcastle-under-Lyme Stoke forms The Potteries Urban Area...
, however voters in the city voted to abolish the directly elected mayor system in a referendum
Referendum
A referendum is a direct vote in which an entire electorate is asked to either accept or reject a particular proposal. This may result in the adoption of a new constitution, a constitutional amendment, a law, the recall of an elected official or simply a specific government policy. It is a form of...
held in October 2008. The referendum decided to replace the mayor and executive system with a council leader and cabinet system of local government.