Encyclopedia
The 1826 United Kingdom general election saw the Tories under the Earl of Liverpool
Robert Jenkinson, 2nd Earl of Liverpool
Robert Banks Jenkinson, 2nd Earl of Liverpool KG PC was a British politician and the longest-serving Prime Minister of the United Kingdom since the Union with Ireland in 1801. He was 42 years old when he became premier in 1812 which made him younger than all of his successors to date...
win a substantial and increased majority over the Whigs. In Ireland
Ireland
Ireland is an island to the northwest of continental Europe. It is the third-largest island in Europe and the twentieth-largest island on Earth...
, Home Rule
Home rule
Home rule is the power of a constituent part of a state to exercise such of the state's powers of governance within its own administrative area that have been devolved to it by the central government....
candidates, working with the Whigs, won large gains from Unionist candidates.

The seventh United Kingdom Parliament was dissolved on 2 June 1826. The new Parliament was summoned to meet on 25 July 1826, for a maximum seven year term from that date. The maximum term could be and normally was curtailed, by the monarch dissolving the Parliament, before its term expired.

The Tory leader was the Earl of Liverpool, who had been Prime Minister since his predecessor's assassination in 1812. Liverpool had led his party to three general election victories before that of 1826. 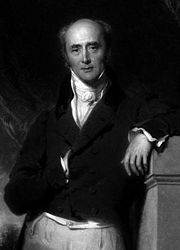 The Whig Party continued to suffer from weak leadership, particularly in the House of Commons.

At the time of the general election, Grey was still the leading figure amongst the Whig peers. It was likely that he would have been invited to form a government, had the Whigs come to power, although in this era the monarch rather than the governing party decided which individual would be Prime Minister.

The Leader of the Opposition in the House of Commons at the previous general election, George Tierney
George Tierney
George Tierney PC was an English Whig politician.-Background and education:Born in Gibraltar, Tierney was the son of Thomas Tierney, a wealthy Irish merchant of London, who was living in Gibraltar as prize agent. He was sent to Eton and Peterhouse, Cambridge, where he took the degree of Law in 1784...
, disclaimed the leadership on 23 January 1821. No new Whig leader emerged during the rest of the Parliament.

There had been significant developments in Irish politics since the 1820 general election. Whilst Catholics in Ireland, who met the normal property qualifications, had been permitted to vote since before the Union; they were still not eligible to sit in the United Kingdom Parliament. The right for Catholics to serve in Parliament was known as a measure of Catholic Emancipation
Catholic Emancipation
Catholic emancipation or Catholic relief was a process in Great Britain and Ireland in the late 18th century and early 19th century which involved reducing and removing many of the restrictions on Roman Catholics which had been introduced by the Act of Uniformity, the Test Acts and the penal laws...
. In 1823, Daniel O'Connell
Daniel O'Connell
Daniel O'Connell Daniel O'Connell Daniel O'Connell (6 August 1775 – 15 May 1847; often referred to as The Liberator, or The Emancipator, was an Irish political leader in the first half of the 19th century...
started a campaign for repeal of the Act of Union, and took Catholic Emancipation as his rallying call, establishing the Catholic Association
Catholic Association
The Catholic Association was an Irish Roman Catholic political organisation set up by Daniel O'Connell in the early nineteenth century to campaign for Catholic emancipation within the United Kingdom of Great Britain and Ireland. It was one of the first mass-membership political movements in...
.

From 1826, the Catholic Association began to support pro-emancipation candidates in elections. The Association used its money and manpower to campaign for candidates to be elected into parliament, to pressure the government from within to pass Catholic emancipation.

At this period there was not one election day. After receiving a writ (a royal command) for the election to be held, the local returning officer
Returning Officer
In various parliamentary systems, a returning officer is responsible for overseeing elections in one or more constituencies.-Australia:In Australia a returning officer is an employee of the Australian Electoral Commission or a State Electoral Commission who heads the local divisional office...
fixed the election timetable for the particular constituency or constituencies he was concerned with. Polling in seats with contested elections could continue for many days.


Summary of the constituencies

Monmouthshire
Monmouthshire (historic)
Monmouthshire , also known as the County of Monmouth , is one of thirteen ancient counties of Wales and a former administrative county....
(1 County constituency with 2 MPs and one single member Borough constituency) is included in Wales in these tables. Sources for this period may include the county in England.

Table 1: Constituencies and MPs, by type and country