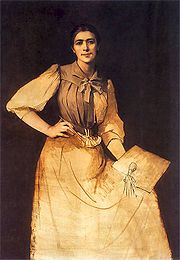 In some cases, underdrawing can be clearly visualized using infrared
Infrared
Infrared light is electromagnetic radiation with a wavelength longer than that of visible light, measured from the nominal edge of visible red light at 0.74 micrometres , and extending conventionally to 300 µm...
reflectography because carbon black
Carbon black
Carbon black is a material produced by the incomplete combustion of heavy petroleum products such as FCC tar, coal tar, ethylene cracking tar, and a small amount from vegetable oil. Carbon black is a form of amorphous carbon that has a high surface-area-to-volume ratio, although its...
pigments absorb infrared light, whereas opaque pigments such as lead white are transparent with infrared light.

What is remarkable about some historical examples of underdrawing, in, for example, the Annunciation (van Eyck, Washington)
Annunciation (van Eyck, Washington)
The Annunciation is an oil painting by the Early Netherlandish master Jan van Eyck, from around 1434-1436. It is in the National Gallery of Art, in Washington D.C. It was originally on panel but has been transferred to canvas. It is thought that it was the left wing of a triptych; there has...
or the Arnolfini Portrait
Arnolfini portrait
The Arnolfini Portrait is an oil painting on oak panel dated 1434 by the Early Netherlandish painter Jan van Eyck. It is also known as The Arnolfini Wedding, The Arnolfini Marriage, The Arnolfini Double Portrait or the Portrait of Giovanni Arnolfini and his Wife, among other titles...
, is the extent to which artists made radical alterations to their carefully laid designs.
The source of this article is wikipedia, the free encyclopedia.  The text of this article is licensed under the GFDL.