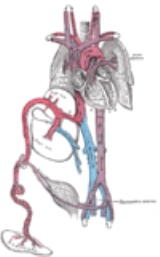 Encyclopedia
The umbilical vein is a vein
Vein
In the circulatory system, veins are blood vessels that carry blood towards the heart. Most veins carry deoxygenated blood from the tissues back to the heart; exceptions are the pulmonary and umbilical veins, both of which carry oxygenated blood to the heart...
present during fetal development that carries oxygenated blood from the placenta
Placenta
The placenta is an organ that connects the developing fetus to the uterine wall to allow nutrient uptake, waste elimination, and gas exchange via the mother's blood supply. "True" placentas are a defining characteristic of eutherian or "placental" mammals, but are also found in some snakes and...
to the growing fetus
Fetus
A fetus is a developing mammal or other viviparous vertebrate after the embryonic stage and before birth.In humans, the fetal stage of prenatal development starts at the beginning of the 11th week in gestational age, which is the 9th week after fertilization.-Etymology and spelling variations:The...
.

The blood pressure inside the umbilical vein is approximately 20 mmHg.

During embryologic development
Embryogenesis
Embryogenesis is the process by which the embryo is formed and develops, until it develops into a fetus.Embryogenesis starts with the fertilization of the ovum by sperm. The fertilized ovum is referred to as a zygote...
, there are two umbilical veins, left and right, that drain blood from the placenta to the heart. The right umbilical vein regresses and under normal circumstances is completely obliterated during the second month of development. The left umbilical vein persists and delivers blood from the placenta
Placenta
The placenta is an organ that connects the developing fetus to the uterine wall to allow nutrient uptake, waste elimination, and gas exchange via the mother's blood supply. "True" placentas are a defining characteristic of eutherian or "placental" mammals, but are also found in some snakes and...
to the developing fetus. The diameter of the intra-abdominal umbilical vein increases linearly, from 3 mm at 15 weeks of gestation to 8 mm at term.

Closure of the umbilical vein usually occurs after the umbilical arteries have closed. This prolongs the communication between the placenta and fetal heart, allowing for a sort of autotransfusion
Autotransfusion
Autotransfusion is a process when a person receives their own blood for a transfusion, instead of banked donor blood. Blood can be pre-donated before a surgery, or can be collected during and after the surgery using a device commonly known as the Cell Saver. The Cell Saver is utilized in surgeries...
of remaining blood from the placenta to the fetus.

Under extreme pressure
Blood pressure
Blood pressure is the pressure exerted by circulating blood upon the walls of blood vessels, and is one of the principal vital signs. When used without further specification, "blood pressure" usually refers to the arterial pressure of the systemic circulation. During each heartbeat, BP varies...
, the round ligament may reopen to allow the passage of blood. Such recanalization is common in patients with cirrhosis
Cirrhosis
Cirrhosis is a consequence of chronic liver disease characterized by replacement of liver tissue by fibrosis, scar tissue and regenerative nodules , leading to loss of liver function...
and portal hypertension
Portal hypertension
In medicine, portal hypertension is hypertension in the portal vein and its tributaries.It is often defined as a portal pressure gradient of 10 mmHg or greater.-Causes:Causes can be divided into prehepatic, intrahepatic, and posthepatic...
. Patients with cirrhosis experience rapid growth of scar tissue
Scar tissue
Scar tissue can refer to:*Granulation tissue, a product of healing in major wounds*The tissue of a scar*"Scar Tissue", a Red Hot Chili Peppers song*Scar Tissue , the autobiography of Anthony Kiedis, lead singer of the Red Hot Chili Peppers...
in and around the liver, often functionally obstructing nearby vessels. Vessel occlusion increases vascular resistance and therefore leads to hypertension. In portal hypertension, the vessels surrounding the liver
Liver
The liver is a vital organ present in vertebrates and some other animals. It has a wide range of functions, including detoxification, protein synthesis, and production of biochemicals necessary for digestion...
are subjected to abnormally high blood pressure—so high, in fact, that the force of the blood pressing against the round ligament is sufficient to recanalize the structure.

A newborn baby has a patent umbilical vein for at least a week after birth. This umbilical vein may be catheterised for ready intravenous access. It may be used as a site for regular transfusion in cases of erythroblastosis or hemolytic disease.