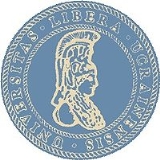 Encyclopedia
The Ukrainian Free University is a private graduate university located in Munich
Munich
Munich The city's motto is "" . Before 2006, it was "Weltstadt mit Herz" . Its native name, , is derived from the Old High German Munichen, meaning "by the monks' place". The city's name derives from the monks of the Benedictine order who founded the city; hence the monk depicted on the city's coat...
, Germany
Germany
Germany , officially the Federal Republic of Germany , is a federal parliamentary republic in Europe. The country consists of 16 states while the capital and largest city is Berlin. Germany covers an area of 357,021 km2 and has a largely temperate seasonal climate...
.

The Ukrainian Free University (UFU) was established in Vienna
Vienna
Vienna is the capital and largest city of the Republic of Austria and one of the nine states of Austria. Vienna is Austria's primary city, with a population of about 1.723 million , and is by far the largest city in Austria, as well as its cultural, economic, and political centre...
, January 17, 1921. The idea to organize a Ukrainian university-in-exile came from Ukrainian academics, some of whom had held chairs at universities in the Russian and Austro-Hungarian Empires. UFU was transferred in the fall of 1921 to Prague, Czechoslovakia. The host government granted UFU full academic accreditation and provided the University with financial support. UFU received wide recognition during its Prague period for significant and productive teaching, research and publications.

After the Second World War, UFU established its seat in Munich, Germany. The September 16, 1950 Free State of Bavaria Ministerial decree guaranteed degree granting privileges. In the ensuing period various Bavarian university laws and ministerial decrees reaffirmed this academic privilege. Federal German and Bavarian governmental financial support contributed towards worthwhile research, publishing and teaching activities. The University became a recognized Western European scholarly centre, specializing in the study of Ukraine within the USSR and of Ukrainians in the diaspora. Emphasis was placed on the study of Ukrainian history, literature, culture, law and politics. German and Bavarian financial aid ceased in the years following Ukrainian independence, as it was assumed that patronage of the University would be assured by Ukraine.The Ukrainian Ministry of Education recognized UFU doctoral decrees in November 1992. To date, Ukrainian governmental funding have not materialized. Thus, since 2009, the Ukrainian Free University relies entirely on its own resources.

Over the years, the University has evolved from a "university-in-exile" to a full-fledged, though highly specialized, European Union graduate school. Nevertheless, UFU has retained much of its remarkableness and singularity. In its research and publishing activities the University focuses primarily on Ukraine and things Ukrainian. The University has three academic structures. The Faculty of Ukrainian Studies concentrates on interdisciplinary Ukrainian studies . Culture, literature and history constitute the core of Ukrainian studies. The Faculty of Philosophy houses the remaining humanitarian disciplines, such as philosophy, fine arts, musi, teacher training and religion. The Faculty of Government and Political Economy unites such social science disciplines as political science, economics and business, sociology, psychology and legal studies.

UFU is the only private university in the world which, while located outside of Ukraine, offers graduate programs of study in the social sciences and the humanities, primarily in Ukrainian language. In fact, in order to be able to matriculate at UFU one must demonstrate fluency in Ukrainian. Masters programs require two to three semesters of course work, an MA thesis and an oral thesis defense. Doctoral programs stipulate three semesters of course work, a doctoral dissertation, philosophy commprehensives and an oral thesis defense.Dissertations are normally written in Ukrainian. In exceptional cases permission may be granted to write in another language. Winter Semester teaching period runs from early November to mid December and from the end of January until early March. Summer Semester teaching period is from early May until the end of July.