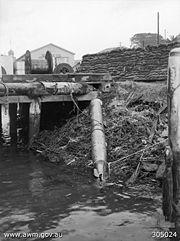 The Type 97 was a 17.7 inches (45 cm) diameter torpedo used by the Imperial Japanese Navy
Imperial Japanese Navy
The Imperial Japanese Navy was the navy of the Empire of Japan from 1869 until 1947, when it was dissolved following Japan's constitutional renunciation of the use of force as a means of settling international disputes...
during World War II. Intended for use with Japan's Ko-hyoteki class midget submarines
Ko-hyoteki class submarine
The class was a class of Japanese midget submarines used during World War II. They had hull numbers but no names. For simplicity, they are most often referred to by the hull number of the mother submarine...
, the torpedo was based on the Type 93 "Long Lance"
Type 93 torpedo
The Type 93 was a -diameter torpedo of the Imperial Japanese Navy , launched from surface ships. It is commonly referred to as the Long Lance by most modern English-language naval historians, a nickname given it after the war by Samuel E. Morison, the chief historian of the U.S...
used by larger Japanese submarines, but redesigned to meet the smaller physical dimensions of the midgets' two torpedo tubes.

Four Type 97 Special torpedoes were fired during the Japanese midget submarine raid on Sydney Harbour
Attack on Sydney Harbour
In late May and early June 1942, during World War II, submarines belonging to the Imperial Japanese Navy made a series of attacks on the cities of Sydney and Newcastle in New South Wales, Australia...
in the early hours of June 1, 1942. Two were fired by the midget M-24 and aimed at the American heavy cruiser USS Chicago
USS Chicago (CA-29)
USS Chicago was a Northampton-class heavy cruiser of the United States Navy that served in the Pacific Theater in the early years of World War II. She was the second US Navy ship to be named after the city of Chicago, Illinois...
, then tied to the No 2. buoy at Garden Island in Sydney Harbour. Both missed. One struck the harbour wall beneath the depot ship HMAS Kuttabul
HMAS Kuttabul (ship)
HMAS Kuttabul was a Royal Australian Navy depot ship, and former Sydney harbour ferry. During the Japanese midget submarine attack on Sydney Harbour on 31 May 1942, Kuttabul was torpedoed and sunk, with 21 Commonwealth naval personnel aboard....
, sinking the converted ferry and killing 19 Australian and 2 British sailors aboard. The second failed to arm, and ran harmlessly aground at Garden Island.

The remaining two were fired in Sydney Harbour by the midget M-21. The timing of their firing and their target, if any, are unknown. M-21 had been rammed and depth charged by HMAS Yandra at the entrance to Sydney Harbour around 2300 on May 31, but managed to recover sufficiently to enter the harbour at 03:01 on June 1. M-21 was eventually cornered and sunk at 05:15 on June 1 in Taylors Bay inside Sydney Harbour. When the wreck was raised on June 4, both torpedoes had been fired. However the bow caps covering the torpedo tubes failed to drop clear, instead remaining caught in the buckled bow cage of the submarine. The No. 1 torpedo travelled approximately three feet clear of the tube before jamming. The No. 2 torpedo travelled 18 inches before it too jammed.
The source of this article is wikipedia, the free encyclopedia.  The text of this article is licensed under the GFDL.