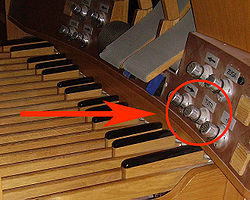 Tutti is an Italian
Italian language
Italian is a Romance language spoken mainly in Europe: Italy, Switzerland, San Marino, Vatican City, by minorities in Malta, Monaco, Croatia, Slovenia, France, Libya, Eritrea, and Somalia, and by immigrant communities in the Americas and Australia...
word literally meaning all or together and is used as a musical term, for the whole orchestra as opposed to the soloist. It is applied similarly to choral
Choir
A choir, chorale or chorus is a musical ensemble of singers. Choral music, in turn, is the music written specifically for such an ensemble to perform.A body of singers who perform together as a group is called a choir or chorus...
music, where the whole section or choir is called to sing.

2) An orchestrator
Orchestration
Orchestration is the study or practice of writing music for an orchestra or of adapting for orchestra music composed for another medium...
may specify that a section leader (e.g., the principal violinist) plays alone, while the rest of the section is silent for the duration of the solo
Solo (music)
In music, a solo is a piece or a section of a piece played or sung by a single performer...
passage, by writing solo in the music at the point where it begins and tutti at the point he wishes the rest of the section to resume playing.

3) In organ music
Organ (music)
The organ , is a keyboard instrument of one or more divisions, each played with its own keyboard operated either with the hands or with the feet. The organ is a relatively old musical instrument in the Western musical tradition, dating from the time of Ctesibius of Alexandria who is credited with...
, it indicates that the full organ should be used: all stops and all couplers. (This organ usage is sometimes instead indicated as

.) To simplify this changing over, many organ consoles offer a toe stud or a piston to call the tutti: Pressing once begins the tutti, and pressing again reverts to the previous registration.

In Italian
Italian language
Italian is a Romance language spoken mainly in Europe: Italy, Switzerland, San Marino, Vatican City, by minorities in Malta, Monaco, Croatia, Slovenia, France, Libya, Eritrea, and Somalia, and by immigrant communities in the Americas and Australia...
, tutti is plural, tutto is the singular form.
The source of this article is wikipedia, the free encyclopedia.  The text of this article is licensed under the GFDL.