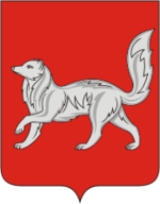 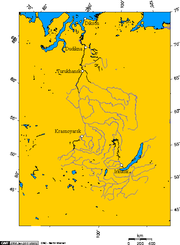 Turukhansk is a village
Types of settlements in Russia
The classification system of the types of inhabited localities in Russia, the former Soviet Union, and some other post-Soviet states has certain peculiarities compared to the classification systems in other countries.-Modern classification in Russia:...
(selo) in Krasnoyarsk Krai
Krasnoyarsk Krai
Krasnoyarsk Krai is a federal subject of Russia . It is the second largest federal subject after the Sakha Republic, and Russia's largest krai, occupying an area of , which is 13% of the country's total territory. The administrative center of the krai is the city of Krasnoyarsk...
, Russia
Russia
Russia or , officially known as both Russia and the Russian Federation , is a country in northern Eurasia. It is a federal semi-presidential republic, comprising 83 federal subjects...
. It is located 1474 km north of Krasnoyarsk
Krasnoyarsk
Krasnoyarsk is a city and the administrative center of Krasnoyarsk Krai, Russia, located on the Yenisei River. It is the third largest city in Siberia, with the population of 973,891. Krasnoyarsk is an important junction of the Trans-Siberian Railway and one of Russia's largest producers of...
, at the confluence of the Yenisei
Yenisei River
Yenisei , also written as Yenisey, is the largest river system flowing to the Arctic Ocean. It is the central of the three great Siberian rivers that flow into the Arctic Ocean...
and Lower Tunguska
Lower Tunguska
Nizhnyaya Tunguska — is a river in Siberia, Russia, flows through the Irkutsk Oblast and the Krasnoyarsk Krai. The river is a right tributary of the Yenisei joining it at Turukhansk . Settlements on the river include Tura, Yukti and Simenga...
rivers. The Turukhan River
Turukhan River
Turukhan River is a river in northern Krasnoyarsk Krai in Russia. It is a left tributary of the Yenisei River. The length of the river is 639 km. The area of its basin is 35,800 km². The Turukhan River freezes up in October and stays under the ice until late May - first half of June. Its main...
joins the Yenisei about 20 km northwest. Population: 4,849 (2002 Census
Russian Census (2002)
Russian Census of 2002 was the first census of the Russian Federation carried out on October 9 through October 16, 2002. It was carried out by the Russian Federal Service of State Statistics .-Resident population:...
); 8,900 (1989); 200 (1897). It is served by Turukhansk Airport
Turukhansk Airport
Turukhansk Airport is an airport in Krasnoyarsk Krai, Russia located 2 km west of Turukhansk. It services medium-size airliners....
.

One of the first Russian settlements in Siberia
Siberia
Siberia is an extensive region constituting almost all of Northern Asia. Comprising the central and eastern portion of the Russian Federation, it was part of the Soviet Union from its beginning, as its predecessor states, the Tsardom of Russia and the Russian Empire, conquered it during the 16th...
, Turukhansk was founded in 1607 as a winter camp for Cossacks and merchants. After the disastrous fires of Mangazeya
Mangazeya
Mangazeya was a Northwest Siberian trans-Ural trade colony and later city in the 16-17th centuries. Founded in 1600, it was situated on the Taz River, between the lower courses of the Ob and Yenisei Rivers flowing into the Arctic Ocean....
in 1619, 1642, and 1662, Turukhansk welcomed a large portion of the older colony's population and became known as New Mangazeya. A timber fort with cannons was built there in 1677. The settlement hosted one of the largest fairs in Siberia and was incorporated as an uyezd
Uyezd
Uyezd or uezd was an administrative subdivision of Rus', Muscovy, Russian Empire, and the early Russian SFSR which was in use from the 13th century. Uyezds for most of the history in Russia were a secondary-level of administrative division...
town of Turukhansk in 1785. The town declined after 1822.

In the Russian Empire
Russian Empire
The Russian Empire was a state that existed from 1721 until the Russian Revolution of 1917. It was the successor to the Tsardom of Russia and the predecessor of the Soviet Union...
and the Soviet Union
Soviet Union
The Soviet Union , officially the Union of Soviet Socialist Republics , was a constitutionally socialist state that existed in Eurasia between 1922 and 1991....
Turukhansk was often used a destination for political exile. Among people exiled there were Julius Martov
Julius Martov
Julius Martov or L. Martov was born in Constantinople in 1873...
, Yakov Sverdlov
Yakov Sverdlov
Yakov Mikhaylovich Sverdlov ; known under pseudonyms "Andrei", "Mikhalych", "Max", "Smirnov", "Permyakov" — 16 March 1919) was a Bolshevik party leader and an official of the Russian Soviet Republic.-Early life:...
, Joseph Stalin
Joseph Stalin
Joseph Vissarionovich Stalin was the Premier of the Soviet Union from 6 May 1941 to 5 March 1953. He was among the Bolshevik revolutionaries who brought about the October Revolution and had held the position of first General Secretary of the Communist Party of the Soviet Union's Central Committee...
, Lev Kamenev
Lev Kamenev
Lev Borisovich Kamenev , born Rozenfeld , was a Bolshevik revolutionary and a prominent Soviet politician. He was briefly head of state of the new republic in 1917, and from 1923-24 the acting Premier in the last year of Lenin's life....
, Marina Tsvetaeva
Marina Tsvetaeva
Marina Ivanovna Tsvetaeva was a Russian and Soviet poet. Her work is considered among some of the greatest in twentieth century Russian literature. She lived through and wrote of the Russian Revolution of 1917 and the Moscow famine that followed it. In an attempt to save her daughter Irina from...
's daughter Ariadna Efron and Archbishop
Archbishop
An archbishop is a bishop of higher rank, but not of higher sacramental order above that of the three orders of deacon, priest , and bishop...
Luka Voyno-Yasenetsky
Luka Voyno-Yasenetsky
Archbishop Luka was a Russian outstanding surgeon, the founder of purulent surgery, a spiritual writer, a bishop of Russian Orthodox Church, and an archbishop of Simferopol and of the Crimea since May 1946...
.
The source of this article is wikipedia, the free encyclopedia.  The text of this article is licensed under the GFDL.