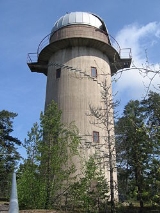 Encyclopedia
Tuorla Observatory is the Department of Astronomy at the University of Turku
University of Turku
The University of Turku , located in Turku in southwestern Finland, is the second largest university in the country as measured by student enrollment, after University of Helsinki. It was established in 1920 and also has faculties at Rauma, Pori and Salo...
, southwest Finland
Finland
Finland , officially the Republic of Finland, is a Nordic country situated in the Fennoscandian region of Northern Europe. It is bordered by Sweden in the west, Norway in the north and Russia in the east, while Estonia lies to its south across the Gulf of Finland.Around 5.4 million people reside...
. Currently it is the largest astronomical research institute in Finland. Together with the Space Research Laboratory at the Physics Department of the University of Turku, it forms Väisälä Institute of Space Physics and Astronomy (VISPA).

Tuorla Observatory was established in 1952 by professor Yrjö Väisälä
Yrjö Väisälä
Yrjö Väisälä was a Finnish astronomer and physicist.His main contributions were in the field of optics, but he was also very active in geodetics, astronomy and optical metrology...
. A new observatory was needed because the old Iso-Heikkilä Observatory
Iso-Heikkilä Observatory
Iso-Heikkilä Observatory is an amateur astronomical observatory in the Iso-Heikkilä district of Turku, Finland. It was operated by the University of Turku from 1937 to 1972 but is now used by a local division of Ursa Astronomical Association.-History:...
close to the centre of Turku
Turku
Turku is a city situated on the southwest coast of Finland at the mouth of the Aura River. It is located in the region of Finland Proper. It is believed that Turku came into existence during the end of the 13th century which makes it the oldest city in Finland...
started suffering heavy light pollution
Light pollution
Light pollution, also known as photopollution or luminous pollution, is excessive or obtrusive artificial light.The International Dark-Sky Association defines light pollution as:...
from nearby city and especially industrial areas to the south of the observatory. A new place was found in Tuorla, which is one of the small villages in (former) Piikkiö
Piikkiö
Piikkiö , is a former municipality of Finland. Piikkiö was consolidated with Kaarina on January 1, 2009.It is located in the province of Western Finland and is part of the Finland Proper region. The municipality had a population of 6,836 and covered an area of 90.35 km² of which...
municipality. It is located about 12 kilometres from Turku in the direction of Helsinki
Helsinki
Helsinki is the capital and largest city in Finland. It is in the region of Uusimaa, located in southern Finland, on the shore of the Gulf of Finland, an arm of the Baltic Sea. The population of the city of Helsinki is , making it by far the most populous municipality in Finland. Helsinki is...
.

The first part of the observatory contained a main building and 51 meter long tunnel for optical research. Due to the growing size of the department, new parts to it have been built in 1989 and 2002. Starting in 1974, the observatory was part of the Physics Department until 1991 when it became again an independent research institute of the university. In 2009 observatory reunited with physics department and is currently one of the seven laboratories of Department of Physics and Astronomy at University of Turku.

Since October 2008 Tuorla Planetarium has been operating next to the observatory.

The main area of research in Tuorla is active galactic nuclei; about half of the researchers are working on the topic. Other areas are dark matter
Dark matter
In astronomy and cosmology, dark matter is matter that neither emits nor scatters light or other electromagnetic radiation, and so cannot be directly detected via optical or radio astronomy...
, cosmology
Cosmology
Cosmology is the discipline that deals with the nature of the Universe as a whole. Cosmologists seek to understand the origin, evolution, structure, and ultimate fate of the Universe at large, as well as the natural laws that keep it in order...
, astrodynamics
Astrodynamics
Orbital mechanics or astrodynamics is the application of ballistics and celestial mechanics to the practical problems concerning the motion of rockets and other spacecraft. The motion of these objects is usually calculated from Newton's laws of motion and Newton's law of universal gravitation. It...
, binary stars, solar neighborhood, solar physics
Solar physics
For the physics journal, see Solar Physics Solar physics is the study of our Sun. It is a branch of astrophysics that specializes in exploiting and explaining the detailed measurements that are possible only for our closest star...
and astrobiology
Astrobiology
Astrobiology is the study of the origin, evolution, distribution, and future of life in the universe. This interdisciplinary field encompasses the search for habitable environments in our Solar System and habitable planets outside our Solar System, the search for evidence of prebiotic chemistry,...
. The optical laboratory produces high quality optics for telescopes.