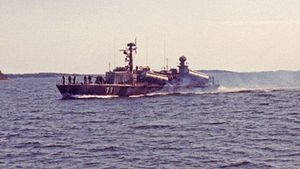 The Tuima class missile boat
Missile boat
A Missile Boat is a small craft armed with anti-ship missiles. Being a small craft, missile boats are popular with nations interested in forming an inexpensive navy...
was a class of fast attack craft
Fast Attack Craft
Fast Attack Craft are small, fast, agile and offensive warships, that are armed with anti-ship missiles, guns or torpedoes. These are usually operated in close proximity to land as they lack both the sea-keeping and all-round defensive capabilities to survive in blue water. The size of the vessel...
in use by the Finnish Navy
Finnish Navy
The Finnish Navy is one of the branches of the Finnish Defence Forces. The Navy employs 2,300 people and about 4,300 conscripts are trained each year. Finnish Navy vessels are given the ship prefix "FNS" simply short for "Finnish Navy Ship"...
.

The vessels were constructed in the Soviet Union
Soviet Union
The Soviet Union , officially the Union of Soviet Socialist Republics , was a constitutionally socialist state that existed in Eurasia between 1922 and 1991....
and purchased by the Finnish Navy between 1974 and 1975. The vessels were similar to the Soviet Project 205U Tsunami class missile boats, known in the west as Osa II
Osa class missile boat
The Project 205 Tsunami, more commonly known by their NATO reporting name Osa, are a class of missile boats developed for the Soviet Navy in the early 1960s. The Osas are probably the most numerous class of missile boats ever built, with over 400 vessels constructed for both the Soviet Navy and for...
.

All of the vessels were later modified into fast minelayer
Minelayer
Minelaying is the act of deploying explosive mines. Historically this has been carried out by ships, submarines and aircraft. Additionally, since World War I the term minelayer refers specifically to a naval ship used for deploying naval mines...
s at Aker Finnyards when their armament became obsolete. The modification work took place between 1993 and 1994 at the Uusikaupunki
Uusikaupunki
Uusikaupunki , is a town and municipality of Finland.It is located in the Finland Proper region. The municipality has a population of and covers an area of of which is inland water. The population density is .The municipality is unilingually Finnish...
yards. Tuima and Tuuli had their missiles removed and the superstructure was modified. Mine rails and mine loading equipment were installed and the weapons guidance systems were modernized. Tuisku and Tyrsky were also modernized into fast minelayers, but less extensively, removing their missile weapons, and installing mine rails. The Tuima class vessels belonged to the 5th Minewarfare Squadron based at Upinniemi
Upinniemi
Upinniemi is a village in the municipality of Kirkkonummi in southern Finland. It is located approximately 12 km south of the municipal centre....
.

The vessels of the class were decommissioned by 2000.

The Tuima class had three 56-cylinder radial diesel engines, each one producing 3 500 kW. The middle engine and propeller shaft of Tuima and Tuuli were removed during the modernization to make space for the mine laying equipment. This lowered the top-speed by 7 knots. The class was known amongst the Finnish Navy
Finnish Navy
The Finnish Navy is one of the branches of the Finnish Defence Forces. The Navy employs 2,300 people and about 4,300 conscripts are trained each year. Finnish Navy vessels are given the ship prefix "FNS" simply short for "Finnish Navy Ship"...
conscripts as Tuska (Agony) class or Moskvich after a Russian car brand of that name. They were not considered as pleasant places to serve because of their poor ergonomy.

After decommissioning, the vessels were moored at Loviisa
Loviisa
Loviisa is a municipality and town of inhabitants on the southern coast of Finland. About 43 per cent of the population is Swedish-speaking.The municipality covers an area of of which is water...
, and it was planned that one was to be transferred to the new Maritime Museum in Kotka
Kotka
Kotka is a town and municipality of Finland. Its former name is Rochensalm.Kotka is located on the coast of the Gulf of Finland at the mouth of Kymi River and it is part of the Kymenlaakso region in southern Finland. The municipality has a population of and covers an area of of which is water....
. However, in October 2006, the Finnish Ministry of Defence stated that all four were to be sold to Egypt
Egypt
Egypt , officially the Arab Republic of Egypt, Arabic: , is a country mainly in North Africa, with the Sinai Peninsula forming a land bridge in Southwest Asia. Egypt is thus a transcontinental country, and a major power in Africa, the Mediterranean Basin, the Middle East and the Muslim world...
where they were refitted and taken into active service.


Vessels of the class