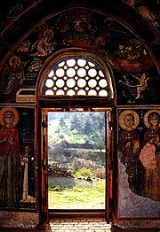 Encyclopedia
Troodos is the biggest mountain
Mountain
Image:Himalaya_annotated.jpg|thumb|right|The Himalayan mountain range with Mount Everestrect 58 14 160 49 Chomo Lonzorect 200 28 335 52 Makalurect 378 24 566 45 Mount Everestrect 188 581 920 656 Tibetan Plateaurect 250 406 340 427 Rong River...
range of Cyprus
Cyprus
Cyprus , officially the Republic of Cyprus , is a Eurasian island country, member of the European Union, in the Eastern Mediterranean, east of Greece, south of Turkey, west of Syria and north of Egypt. It is the third largest island in the Mediterranean Sea.The earliest known human activity on the...
, located in the center of the island. Troodos' highest peak is Mount Olympus
Mount Olympus (Cyprus)
Olympus, or Chionistra, at , is the highest point in Cyprus. It is located in the Troodos Mountains of Cyprus. A British long range radar currently operates at Mount Olympus' peak....
at 1,952 metres.

The Troodos mountain range stretches across most of the western side of Cyprus. There are many famous mountain resorts, Byzantine monasteries and churches on mountain peaks, and nestling in its valleys and picturesque mountain villages clinging to terraced hill slopes. The area has been known since ancient times for its mines, and in the Byzantine period it became a great centre of Byzantine art, as churches and monasteries were built in the mountains, away from the threatened coastline.

The Troodos mountain is known worldwide for its astounding geology and the presence of undisturbed specimens of ophiolite. Troodos slowly rose from the sea due to the collision of the African and European tectonic plates
Plate tectonics
Plate tectonics is a scientific theory that describes the large scale motions of Earth's lithosphere...
, a process that eventually formed the island of Cyprus. The slowing down and eventual almost stopping of this process left the rock formations near intact, while subsequent erosion uncovered the magma chamber
Magma chamber
A magma chamber is a large underground pool of molten rock found beneath the surface of the Earth. The molten rock in such a chamber is under great pressure, and given enough time, that pressure can gradually fracture the rock around it creating outlets for the magma...
underneath the mountain, allowing a viewing of intact rocks and petrified pillow lava
Pillow lava
Pillow lavas are lavas that contain characteristic pillow-shaped structures that are attributed to the extrusion of the lava under water, or subaqueous extrusion. Pillow lavas in volcanic rock are characterized by thick sequences of discontinuous pillow-shaped masses, commonly up to one metre in...
formed millions of years in the past, an excellent example of ophiolite stratigraphy. The observations of the Troodos ophiolite by Ian Graham Gass
Ian Graham Gass
Ian Graham Gass, FRS, geologist, was Professor of Earth Sciences and Head of Discipline at the Open University, Milton Keynes and he was President of the IAVCEI . He was married to Mary Pearce ....
and co-workers was one of the key points that led to the theory of sea floor spreading.

Away from the beach areas tourists find charming traditional villages to explore many remain unspoiled by development or tourism. There are monasteries, beautiful churches and breathtaking scenery to enjoy. The Tourist Office supplies visitors with information and leaflets on recommended walks/trails in the area. The most well-known trail in this region is the Caledonia Falls; it follows a stream to an impressive waterfall. The Troodos Mountains in Cyprus are known for their snowy vistas and has a large number of accommodations from camping sites to 5 star hotels.

The region is known for its many Byzantine churches and monasteries, richly decorated with murals, of which the Kykkos monastery
Kykkos Monastery
The Holy, Royal and Stavropegic Monastery of Kykkos , which lies 20 km west of Pedoulas, is one of the wealthiest and best-known monasteries in Cyprus....
is the richest and most famous. Nine churches and one monastery in Troodos together form a World Heritage Site
World Heritage Site
A UNESCO World Heritage Site is a place that is listed by the UNESCO as of special cultural or physical significance...
, originally inscribed on the World Heritage List by UNESCO
UNESCO
The United Nations Educational, Scientific and Cultural Organization is a specialized agency of the United Nations...
in 1985. The nine Byzantine
Byzantine Empire
The Byzantine Empire was the Eastern Roman Empire during the periods of Late Antiquity and the Middle Ages, centred on the capital of Constantinople. Known simply as the Roman Empire or Romania to its inhabitants and neighbours, the Empire was the direct continuation of the Ancient Roman State...
churches are:

The area has been known since ancient times for its copper
Copper
Copper is a chemical element with the symbol Cu and atomic number 29. It is a ductile metal with very high thermal and electrical conductivity. Pure copper is soft and malleable; an exposed surface has a reddish-orange tarnish...
mines, and in the Byzantine period it became a great centre of Byzantine
Byzantine
Byzantine usually refers to the Roman Empire during the Middle Ages.Byzantine may also refer to:* A citizen of the Byzantine Empire, or native Greek during the Middle Ages...
art, as churches and monasteries were built in the mountains, away from the threatened coastline.