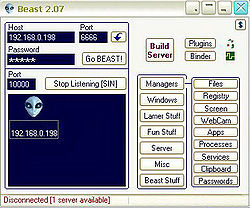 A Trojan horse, or Trojan, is software that appears to perform a desirable function for the user prior to run or install, but (perhaps in addition to the expected function) steals information or harms the system. The term is derived from the Trojan Horse
Trojan Horse
The Trojan Horse is a tale from the Trojan War about the stratagem that allowed the Greeks finally to enter the city of Troy and end the conflict. In the canonical version, after a fruitless 10-year siege, the Greeks constructed a huge wooden horse, and hid a select force of men inside...
story in Greek mythology
Greek mythology
Greek mythology is the body of myths and legends belonging to the ancient Greeks, concerning their gods and heroes, the nature of the world, and the origins and significance of their own cult and ritual practices. They were a part of religion in ancient Greece...
.

A destructive program that masquerades as a benign application. Unlike viruses, Trojan horses do not replicate themselves, but they can be just as destructive. One of the most insidious types of Trojan horse is a program that claims to get rid of viruses but instead introduces viruses onto the computer.

The term comes from the Greek story of the Trojan War, in which the Greeks give a giant wooden horse to their foes, the Trojans, ostensibly as a peace offering. But after the Trojans drag the horse inside their city walls, Greek soldiers sneak out of the horse's hollow belly and open the city gates, allowing their compatriots to pour in and capture Troy.

Operations that could be performed by a hacker on a target computer system include:

Trojan horses in this way require interaction with a hacker
Hacker (computer security)
In computer security and everyday language, a hacker is someone who breaks into computers and computer networks. Hackers may be motivated by a multitude of reasons, including profit, protest, or because of the challenge...
to fulfill their purpose, though the hacker need not be the individual responsible for distributing the Trojan horse. It is possible for individual hackers to scan computers on a network using a port scanner
Port scanner
A port scanner is a software application designed to probe a server or host for open ports. This is often used by administrators to verify security policies of their networks and by attackers to identify running services on a host with the view to compromise it.A port scan or portscan is "An attack...
in the hope of finding one with a malicious Trojan horse installed, which the hacker can then use to control the target computer.

A recent innovation in Trojan horse code takes advantage of a security flaw in older versions of IE explorer and Google Chrome to use the host computer as an anonymizer proxy
Anonymizer
An anonymizer or an anonymous proxy is a tool that attempts to make activity on the Internet untraceable.It is a proxy server computer that acts as an intermediary and privacy shield between a client computer and the rest of the Internet...
to effectively hide internet usage. The hacker
Hacker (computer security)
In computer security and everyday language, a hacker is someone who breaks into computers and computer networks. Hackers may be motivated by a multitude of reasons, including profit, protest, or because of the challenge...
is able to view internet sites while the tracking cookies, internet history, and any IP logging are maintained on the host computer. The host computer may or may not show the internet history of the sites viewed using the computer as a proxy. The first generation of anonymizer Trojan horses tended to leave their tracks in the page view histories of the host computer. Newer generations of the Trojan horse tend to "cover" their tracks more efficiently. Several versions of Slavebot have been widely circulated in the US and Europe and are the most widely distributed examples of this type of Trojan horse.

Due to the popularity of botnets among hackers and the availability of advertising services that permit authors to violate their users' privacy, Trojan horses are becoming more common. According to a survey conducted by BitDefender
BitDefender
BitDefender is an antivirus software suite developed by Romania-based software company Softwin. It was launched in November 2001, and is currently in its 15 build version...
from January to June 2009, "Trojan-type malware is on the rise, accounting for 83-percent of the global malware detected in the world". This virus has a relationship with worms as it spreads with the help given by worms and travel across the internet with them.