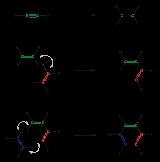 Encyclopedia
In chemistry
Chemistry
Chemistry is the science of matter, especially its chemical reactions, but also its composition, structure and properties. Chemistry is concerned with atoms and their interactions with other atoms, and particularly with the properties of chemical bonds....
, a trimer is a product
Chemical reaction
A chemical reaction is a process that leads to the transformation of one set of chemical substances to another. Chemical reactions can be either spontaneous, requiring no input of energy, or non-spontaneous, typically following the input of some type of energy, such as heat, light or electricity...
derived from three identical precursors. Trimers are typically cyclic. Chemical compounds that often trimerise are aliphatic isocyanate
Isocyanate
Isocyanate is the functional group of elements –N=C=O , not to be confused with the cyanate functional group which is arranged as –O–C≡N or with isocyanide, R-N≡C. Any organic compound which contains an isocyanate group may also be referred to in brief as an isocyanate. An isocyanate may have more...
s and cyanic acids. Often, trimerization competes with polymerization.

In the Reppe synthesis, the trimerization of acetylene
Acetylene
Acetylene is the chemical compound with the formula C2H2. It is a hydrocarbon and the simplest alkyne. This colorless gas is widely used as a fuel and a chemical building block. It is unstable in pure form and thus is usually handled as a solution.As an alkyne, acetylene is unsaturated because...
gives benzene: