Encyclopedia
Tribes of Arabia refers to Arab
Arab
Arab people, also known as Arabs , are a panethnicity primarily living in the Arab world, which is located in Western Asia and North Africa. They are identified as such on one or more of genealogical, linguistic, or cultural grounds, with tribal affiliations, and intra-tribal relationships playing...
clans hailing from the Arabian Peninsula
Arabian Peninsula
The Arabian Peninsula is a land mass situated north-east of Africa. Also known as Arabia or the Arabian subcontinent, it is the world's largest peninsula and covers 3,237,500 km2...
.

Much of the lineage provided before Ma'ad relies on biblical genealogy and therefore questions persist concerning the accuracy of this segment of Arab genealogy. The general consensus among 14th century Arabic genealogists is that Arabs are of three kinds:

Perishing Arabs (Arabic: العرب الهالكة): These are the ancients of whose history little is known. They include ‘Aad, Thamud
Thamud
The Thamūd were a people of ancient Arabia who were known from the 1st millennium BC to near the time of Muhammad. Although they are thought to have originated in southern Arabia, Arabic tradition has them moving north to settle on the slopes of Mount Athlab near Mada'in Saleh...
, Tasm, Jadis, Imlaq and others. Jadis and Tasm perished because of genocide. 'Aad and Thamud perished because of their decadence, as recorded in the Qur'an. Archaeologists have recently uncovered inscriptions that contain references to 'Iram, which was a major city of the 'Aad. Imlaq is the singular form of 'Amaleeq and is probably synonymous to the biblical Amalek
Amalek
The Amalekites are a people mentioned a number of times in the Hebrew Bible. They are considered to be descended from an ancestor Amalek....
.

Pure Arabs (Arabic: العرب العرباء): They are from Yemen
Yemen
The Republic of Yemen , commonly known as Yemen , is a country located in the Middle East, occupying the southwestern to southern end of the Arabian Peninsula. It is bordered by Saudi Arabia to the north, the Red Sea to the west, and Oman to the east....
, originated from the progeny of Ya‘rub bin Yashjub bin Qahtan so were also called Qahtanian Arabs.

Arabized Arabs (Arabic: العرب المستعربة): They originated from the progeny of Ishmael
Ishmael
Ishmael is a figure in the Hebrew Bible and the Qur'an, and was Abraham's first born child according to Jews, Christians and Muslims. Ishmael was born of Abraham's marriage to Sarah's handmaiden Hagar...
the first born son of the patriarch Abraham
Abraham
Abraham , whose birth name was Abram, is the eponym of the Abrahamic religions, among which are Judaism, Christianity and Islam...
and the Jurhum
Jurhum
Jurhum was a Qahtani tribe in the Arabian peninsula. An old Arab tribe, their historical abode was Yemen before they emigrated to Mecca....
tribe, also called ‘Adnani Arabs
Adnan
Adnan is the traditional ancestor of the Adnani Arabs of northern, central and western Arabia, as opposed to the Qahtani of Southern and south eastern Arabia who descend from Qahtan.-Origin:...
. Prophet Muhammad
Muhammad
Muhammad |ligature]] at U+FDF4 ;Arabic pronunciation varies regionally; the first vowel ranges from ~~; the second and the last vowel: ~~~. There are dialects which have no stress. In Egypt, it is pronounced not in religious contexts...
is an 'Adnani Arab. 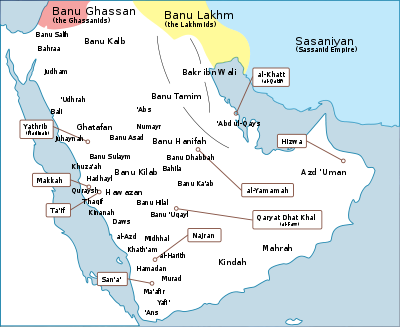 Below is a partial list of the tribes of Arabia.