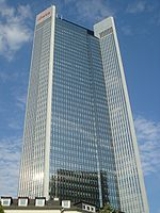 Encyclopedia
Trianon is a 186 metres skyscraper
Skyscraper
A skyscraper is a tall, continuously habitable building of many stories, often designed for office and commercial use. There is no official definition or height above which a building may be classified as a skyscraper...
in Frankfurt am Main, Germany
Germany
Germany , officially the Federal Republic of Germany , is a federal parliamentary republic in Europe. The country consists of 16 states while the capital and largest city is Berlin. Germany covers an area of 357,021 km2 and has a largely temperate seasonal climate...
. It was completed in 1993, and topped out at 45 storeys. Atop the building is an upside-down pyramid suspended from the three corners. Trianon is currently used by the investment company DEKA as their headquarters, as well as by Linklaters
Linklaters
Linklaters LLP is a global law firm headquartered in London, United Kingdom and a member of the 'Magic Circle' of leading UK law firms. Linklaters is the world's fourth largest global law firm by revenue. In 2009/10 it received total revenues of £1.18 billion and profits per equity partner of £1.2...
and Franklin Templeton. The Trianon was sold by DEKA to Morgan Stanley
Morgan Stanley
Morgan Stanley is a global financial services firm headquartered in New York City serving a diversified group of corporations, governments, financial institutions, and individuals. Morgan Stanley also operates in 36 countries around the world, with over 600 offices and a workforce of over 60,000....
in 2007, the building was acquired by the Morgan Stanley European Office Fund (MSEOF). A 57% interest was later passed on to the real estate investment fund Morgan Stanley P2 value