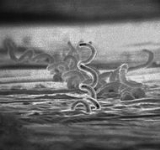 The species Treponema hyodysenteriae and Treponema innocens have been reclassified into Serpula.

Treponema paraluiscuniculi is associated with syphilis
Syphilis
Syphilis is a sexually transmitted infection caused by the spirochete bacterium Treponema pallidum subspecies pallidum. The primary route of transmission is through sexual contact; however, it may also be transmitted from mother to fetus during pregnancy or at birth, resulting in congenital syphilis...
in rabbit
Rabbit
Rabbits are small mammals in the family Leporidae of the order Lagomorpha, found in several parts of the world...
s.

Treponema carateum
Treponema carateum
Treponema carateum is a Treponema species.It is the cause of pinta....
is the cause of pinta
Pinta (disease)
Pinta is a human skin disease endemic to Mexico, Central America, and South America. It is caused by infection with a spirochete, Treponema pallidum carateum, which is morphologically and serologically indistinguishable from the organism that causes syphilis.-Presentation:Pinta is thought to be...
.
The source of this article is wikipedia, the free encyclopedia.  The text of this article is licensed under the GFDL.