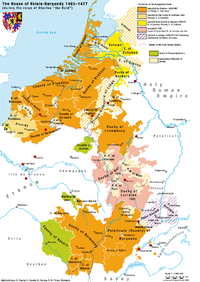 The Treaty of Arras was signed at Arras
Arras
Arras is the capital of the Pas-de-Calais department in northern France. The historic centre of the Artois region, its local speech is characterized as a Picard dialect...
on 23 December 1482 by King Louis XI of France
Louis XI of France
Louis XI , called the Prudent , was the King of France from 1461 to 1483. He was the son of Charles VII of France and Mary of Anjou, a member of the House of Valois....
and Archduke Maximilian I of Habsburg
Maximilian I, Holy Roman Emperor
Maximilian I , the son of Frederick III, Holy Roman Emperor and Eleanor of Portugal, was King of the Romans from 1486 and Holy Roman Emperor from 1493 until his death, though he was never in fact crowned by the Pope, the journey to Rome always being too risky...
as heir of the Burgundian Netherlands
Burgundian Netherlands
In the history of the Low Countries, the Burgundian Netherlands refers to a number of Imperial and French fiefs ruled in personal union by the House of Valois-Burgundy and their Habsburg heirs in the period from 1384 to 1482...
in the course of the Burgundian
Duchy of Burgundy
The Duchy of Burgundy , was heir to an ancient and prestigious reputation and a large division of the lands of the Second Kingdom of Burgundy and in its own right was one of the geographically larger ducal territories in the emergence of Early Modern Europe from Medieval Europe.Even in that...
succession crisis.

The dukes from the House of Valois-Burgundy
House of Valois-Burgundy
The term "Valois Dukes of Burgundy" is employed to refer to the dynasty which began after John II of France granted the Duchy of Burgundy to his youngest son, Philip the Bold...
, a cadet branch of the French royal House of Valois, had ruled over a significant amount of territories on both sides of the border between the Kingdom of France
France in the Middle Ages
France in the Middle Ages covers an area roughly corresponding to modern day France, from the death of Louis the Pious in 840 to the middle of the 15th century...
and the Holy Roman Empire
Holy Roman Empire
The Holy Roman Empire was a realm that existed from 962 to 1806 in Central Europe.It was ruled by the Holy Roman Emperor. Its character changed during the Middle Ages and the Early Modern period, when the power of the emperor gradually weakened in favour of the princes...
. When the last Burgundian duke Charles the Bold died at the Battle of Nancy
Battle of Nancy
The Battle of Nancy was the final and decisive battle of the Burgundian Wars, fought outside the walls of Nancy on 5 January 1477 between Charles the Bold, Duke of Burgundy, and René II, Duke of Lorraine...
on 5 January 1477, his territories in France including Burgundy proper, Flanders
County of Flanders
The County of Flanders was one of the territories constituting the Low Countries. The county existed from 862 to 1795. It was one of the original secular fiefs of France and for centuries was one of the most affluent regions in Europe....
, Artois
County of Artois
The County of Artois was an historic province of the Kingdom of France, held by the Dukes of Burgundy from 1384 until 1477/82, and a state of the Holy Roman Empire from 1493 until 1659....
and the Picardy
Picardy
This article is about the historical French province. For other uses, see Picardy .Picardy is a historical province of France, in the north of France...
were seized as reverted fiefs by the French king. Before his death however, Charles had arranged with Emperor Frederick III of Habsburg
Frederick III, Holy Roman Emperor
Frederick the Peaceful KG was Duke of Austria as Frederick V from 1424, the successor of Albert II as German King as Frederick IV from 1440, and Holy Roman Emperor as Frederick III from 1452...
the marriage of their children Mary the Rich
Mary of Burgundy
Mary of Burgundy ruled the Burgundian territories in Low Countries and was suo jure Duchess of Burgundy from 1477 until her death...
and Archduke Maximilian, which took place on 19 August 1477.

Maximilian did not hesitate to defend the heritage of his wife, culminating in the 1479 Battle of Guinegate
Battle of Guinegate (1479)
The First Battle of Guinegate took place on August 7, 1479. French troops of King Louis XI were defeated by the Burgundians led by Archduke Maximilian of Habsburg...
, where he defeated the troops of King Louis XI. However after Mary of Burgundy had died on 27 March 1482, leaving the inheritance of her father to her son, Maximilian had to cope with difficulties to prevail as an accepted regent for their son. To settle the conflict with France, he by the Treaty of Arras agreed to marry his daughter, Archduchess Margaret of Austria, to the Dauphin of France, the later King Charles VIII
Charles VIII of France
Charles VIII, called the Affable, , was King of France from 1483 to his death in 1498. Charles was a member of the House of Valois...
, bringing the Imperial County of Burgundy
County of Burgundy
The Free County of Burgundy , was a medieval county , within the traditional province and modern French region Franche-Comté, whose very French name is still reminiscent of the unusual title of its count: Freigraf...
to the French crown as her dowry. France retained most of its Burgundian fiefdoms except for the affluent County of Flanders, which passed to Maximilian.

Although the bethrotal was later renounced and Charles VIII would marry Duchess Anne of Brittany
Anne of Brittany
Anne, Duchess of Brittany , also known as Anna of Brittany , was a Breton ruler, who was to become queen to two successive French kings. She was born in Nantes, Brittany, and was the daughter of Francis II, Duke of Brittany and Margaret of Foix. Her maternal grandparents were Queen Eleanor of...
, the Burgundian inheritance effectively remained under French control thus ending the dream of a Burgundian kingdom or an independent Duchy of Burgundy once and for all. Maximilian however remained dissatified with the agreement and in 1493 forced King Charles VIII to sign the Treaty of Senlis
Treaty of Senlis
The Treaty of Senlis concerning the Burgundian succession was signed at Senlis, Oise in May of 1493 between Maximilian I, Holy Roman Emperor and King Charles VIII of France....
, by which he re-acquired the County of Burgundy as well as the French counties of Charolais and Artois.