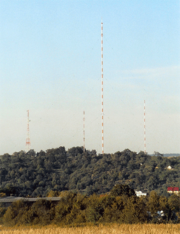 The Mühlacker Broadcasting Transmission Facility is a radio
Radio
Radio is the transmission of signals through free space by modulation of electromagnetic waves with frequencies below those of visible light. Electromagnetic radiation travels by means of oscillating electromagnetic fields that pass through the air and the vacuum of space...
transmission facility near Mühlacker
Mühlacker
Mühlacker is a town in the eastern part of the Enz district in Baden-Württemberg in southern Germany. Mühlacker station has direct rail connections with Stuttgart, Karlsruhe, Heidelberg, Pforzheim and the Northern Black Forest....
, Germany, first put into service in 1930. It uses two guyed steel tube masts as aerials and one guyed steel framework mast, which are insulated against ground. It has two transmission aerials
Antenna (radio)
An antenna is an electrical device which converts electric currents into radio waves, and vice versa. It is usually used with a radio transmitter or radio receiver...
for shortwave
Shortwave
Shortwave radio refers to the upper MF and all of the HF portion of the radio spectrum, between 1,800–30,000 kHz. Shortwave radio received its name because the wavelengths in this band are shorter than 200 m which marked the original upper limit of the medium frequency band first used...
and one free standing steel framework tower for directional radio services. The shortwave transmitter was shut off on October 19, 2004.

In 1930, the facility consisted of a T-type antenna hung between two 100 m high wooden towers placed 310 m apart. These towers were replaced in 1933-34 with a transmitting antenna consisting of a wire hung in a 190 m high wooden tower. This structure was the tallest wooden tower ever built. One of the two original wooden towers was dismantled and rebuilt at Koblenz
Transmitter Koblenz
Transmitter Koblenz was a medium wave transmitter broadcasting in the Koblenz-Luetzel area. Until 1965, Transmitter Koblenz used a 107 metre tall wood tower, which was erected between 2 October 1934 and 15 November 1934...
. The new Mühlacker antenna had the advantage over its predecessor of producing less steep radiation, resulting in a greater range of fading-free reception in the evening hours. On April 6, 1945 the tower was blown up by the SS to prevent its capture by the Allies
Allies of World War II
The Allies of World War II were the countries that opposed the Axis powers during the Second World War . Former Axis states contributing to the Allied victory are not considered Allied states...
in World War II
World War II
World War II, or the Second World War , was a global conflict lasting from 1939 to 1945, involving most of the world's nations—including all of the great powers—eventually forming two opposing military alliances: the Allies and the Axis...
.

Today the most important aerial mast in Mühlacker is a 273 m high guyed steel tube mast with a diameter of 1.67 m, located at 48°56′31"N 8°51′14"E. This mast, which was built in 1950, is used as a transmitter for the mediumwave
Mediumwave
Medium wave is the part of the medium frequency radio band used mainly for AM radio broadcasting. For Europe the MW band ranges from 526.5 kHz to 1606.5 kHz...
frequency 576 kHz and is therefore insulated against ground. It is designed as an antifading aerial and is therefore double-feedable and insulated. The mast is topped with a butterfly aerial for FM-broadcasting transmitters.

Two other radio masts, with heights of 130 m and 80 m, are located at the Mühlacker site.

The three masts are arranged in a nearly straight line on the site. A T-type aerial for shortwave transmission is fixed between two small guyed steel framework masts, but was shut down on October 19, 2004.

Also located here at 48°56′30"N 8°51′5"E was a 50 m steel framework mast insulated against ground. It was part of the directional aerial for the AFN transmitter described above. After 1963, it was only used as an aerial for the internal mobile radio service of the transmission facility. It was demolished in April, 2004 and replaced in the summer of 2004 with a 93 m high freestanding steel framework tower carrying aerials for directional services.