The mountains, valleys and Red Sea
Red Sea
The Red Sea is a seawater inlet of the Indian Ocean, lying between Africa and Asia. The connection to the ocean is in the south through the Bab el Mandeb strait and the Gulf of Aden. In the north, there is the Sinai Peninsula, the Gulf of Aqaba, and the Gulf of Suez...
beaches with turquoise water are known for some of the world's finest diving and attract some, but comparatively few, tourists. Some other spots are hard to reach, such as the Nabatean
Nabataeans
Thamudi3.jpgThe Nabataeans, also Nabateans , were ancient peoples of southern Canaan and the northern part of Arabia, whose oasis settlements in the time of Josephus , gave the name of Nabatene to the borderland between Syria and Arabia, from the Euphrates to the Red Sea...
ruins, a four-hour drive from Medina
Medina
Medina , or ; also transliterated as Madinah, or madinat al-nabi "the city of the prophet") is a city in the Hejaz region of western Saudi Arabia, and serves as the capital of the Al Madinah Province. It is the second holiest city in Islam, and the burial place of the Islamic Prophet Muhammad, and...
, the nearest city with an airport for visitors to fly into. The Kingdom is almost totally dependent on oil, a habit Prince Sultan Bin Salman wants to change by forming the Saudi Commission for Tourism & Antiquities
Saudi Commission for Tourism & Antiquities
Saudi Commission for Tourism & Antiquities is state-run organization, devoted for developing tourism sector in the Kingdom of Saudi Arabia with particular focus on encouraging and supporting domestic tourism through sponsoring and conducting tourism events across the country...
in 2000. There is also the famous bridge to Bahrain
Bahrain
' , officially the Kingdom of Bahrain , is a small island state near the western shores of the Persian Gulf. It is ruled by the Al Khalifa royal family. The population in 2010 stood at 1,214,705, including 235,108 non-nationals. Formerly an emirate, Bahrain was declared a kingdom in 2002.Bahrain is...
.

Al-Diriyah is a town in Saudi Arabia
Saudi Arabia
The Kingdom of Saudi Arabia , commonly known in British English as Saudi Arabia and in Arabic as as-Sa‘ūdiyyah , is the largest state in Western Asia by land area, constituting the bulk of the Arabian Peninsula, and the second-largest in the Arab World...
located on the northwestern outskirts of the Saudi capital, Riyadh
Riyadh
Riyadh is the capital and largest city of Saudi Arabia. It is also the capital of Riyadh Province, and belongs to the historical regions of Najd and Al-Yamama. It is situated in the center of the Arabian Peninsula on a large plateau, and is home to 5,254,560 people, and the urban center of a...
. Diriyah was the original home of the Saudi royal family, and served as the capital of the first Saudi dynasty
First Saudi State
The First Saudi State was established in the year 1744 when imam Muhammad ibn Abd al-Wahhab and Prince Muhammad ibn Saud formed an alliance to establish a religious & political sovereignty determined to cleanse the Arabian Peninsula of heretical practices and deviations from orthodox Islam...
from 1744 to 1818. Today, the town is the seat of the Diriyah Governorate
Diriyah Governorate
al-Dir'iyyah Governorate is a governorate within Riyadh Province in Saudi Arabia. The governorate is bounded by the Saudi capital city of Riyadh to the south and east, by the governorate of Dhruma to the south and west, and by the governorate of Huraymla to the north...
, which also includes the villages of Uyayna, Jubayla, and Al-Ammariyyah, among others, and is part of Ar Riyad Province.


Mada'in Saleh (Arabic
Arabic language
Arabic is a name applied to the descendants of the Classical Arabic language of the 6th century AD, used most prominently in the Quran, the Islamic Holy Book...
: مدائن صالح, madāʼin Ṣāliḥ), also called Al-Hijr or Hegra (so in Greek and Latin, e.g. by Pliny ), is a pre-Islamic
Pre-Islamic Arabia
Pre-Islamic Arabia refers to the Arabic civilization which existed in the Arabian Plate before the rise of Islam in the 630s. The study of Pre-Islamic Arabia is important to Islamic studies as it provides the context for the development of Islam.-Studies:...
archaeological site
Archaeological site
An archaeological site is a place in which evidence of past activity is preserved , and which has been, or may be, investigated using the discipline of archaeology and represents a part of the archaeological record.Beyond this, the definition and geographical extent of a 'site' can vary widely,...
located in the Al-Ula
Al-`Ula
The Al-`Ula oasis , some 110 km southwest of Tayma in northwestern Arabia was located at the incense route.It was the capital of the ancient Lihyanites...
sector, within the Al Madinah Region of Saudi Arabia
Saudi Arabia
The Kingdom of Saudi Arabia , commonly known in British English as Saudi Arabia and in Arabic as as-Sa‘ūdiyyah , is the largest state in Western Asia by land area, constituting the bulk of the Arabian Peninsula, and the second-largest in the Arab World...
. A majority of the vestiges date from the Nabatean kingdom (1st century CE). The site constitutes the kingdom's southernmost and largest settlement after Petra
Petra
Petra is a historical and archaeological city in the Jordanian governorate of Ma'an that is famous for its rock cut architecture and water conduits system. Established sometime around the 6th century BC as the capital city of the Nabataeans, it is a symbol of Jordan as well as its most visited...
, its capital. Traces of Lihyan
Lihyan
Lihyan is an ancient Arab kingdom. It was located in northwestern Arabia, and is known for its Old North Arabian inscriptions dating to ca...
ite and Roman
Roman Empire
The Roman Empire was the post-Republican period of the ancient Roman civilization, characterised by an autocratic form of government and large territorial holdings in Europe and around the Mediterranean....
occupation before and after the Nabatean rule, respectively, can also be found in situ, while accounts from the Qur’an tell of an earlier settlement of the area by the tribe of Thamud
Thamud
The Thamūd were a people of ancient Arabia who were known from the 1st millennium BC to near the time of Muhammad. Although they are thought to have originated in southern Arabia, Arabic tradition has them moving north to settle on the slopes of Mount Athlab near Mada'in Saleh...
in the 3rd millennium BC. 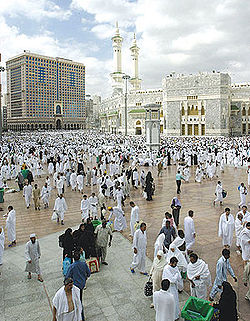