Encyclopedia
Charing Cross Road is a street in central London
Central London
Central London is the innermost part of London, England. There is no official or commonly accepted definition of its area, but its characteristics are understood to include a high density built environment, high land values, an elevated daytime population and a concentration of regionally,...
running immediately north of St Martin-in-the-Fields
St Martin-in-the-Fields
St Martin-in-the-Fields is an Anglican church at the north-east corner of Trafalgar Square in the City of Westminster, London. Its patron is Saint Martin of Tours.-Roman era:Excavations at the site in 2006 led to the discovery of a grave dated about 410...
to St Giles Circus (the intersection with Oxford Street
Oxford Street
Oxford Street is a major thoroughfare in the City of Westminster in the West End of London, United Kingdom. It is Europe's busiest shopping street, as well as its most dense, and currently has approximately 300 shops. The street was formerly part of the London-Oxford road which began at Newgate,...
) and then becomes Tottenham Court Road
Tottenham Court Road
Tottenham Court Road is a major road in central London, United Kingdom, running from St Giles Circus north to Euston Road, near the border of the City of Westminster and the London Borough of Camden, a distance of about three-quarters of a mile...
. It is so called because it serves Charing Cross railway station
Charing Cross railway station
Charing Cross railway station, also known as London Charing Cross, is a central London railway terminus in the City of Westminster, England. It is one of 18 stations managed by Network Rail, and trains serving it are operated by Southeastern...
(named for the nearby Charing Cross
Charing Cross
Charing Cross denotes the junction of Strand, Whitehall and Cockspur Street, just south of Trafalgar Square in central London, England. It is named after the now demolished Eleanor cross that stood there, in what was once the hamlet of Charing. The site of the cross is now occupied by an equestrian...
).

Charing Cross Road was developed, in conjunction with Shaftesbury Avenue
Shaftesbury Avenue
Shaftesbury Avenue is a major street in central London, England, named after Anthony Ashley Cooper, 7th Earl of Shaftesbury, that runs in a north-easterly direction from Piccadilly Circus to New Oxford Street, crossing Charing Cross Road at Cambridge Circus....
, by the Metropolitan Board of Works
Metropolitan Board of Works
The Metropolitan Board of Works was the principal instrument of London-wide government from 1855 until the establishment of the London County Council in 1889. Its principal responsibility was to provide infrastructure to cope with London's rapid growth, which it successfully accomplished. The MBW...
under an 1877 Act of Parliament
Act of Parliament
An Act of Parliament is a statute enacted as primary legislation by a national or sub-national parliament. In the Republic of Ireland the term Act of the Oireachtas is used, and in the United States the term Act of Congress is used.In Commonwealth countries, the term is used both in a narrow...
at a cost of £778,238. The two streets and others such as the Thames Embankment
Thames Embankment
The Thames Embankment is a major feat of 19th century civil engineering designed to reclaim marshy land next to the River Thames in central London. It consists of the Victoria and Chelsea Embankment....
, Northumberland Avenue
Northumberland Avenue
Northumberland Avenue is a London street, running from Trafalgar Square in the west to The Embankment in the east. The avenue was built on the site of Northumberland House, the London home of the Percy family, the Dukes of Northumberland....
, Kingsway
Kingsway (London)
Kingsway is a major road in central London in the United Kingdom, designated as part of the A4200. It runs from High Holborn, at its north end in the London Borough of Camden, and meets Aldwych in the south in the City of Westminster at Bush House. It was built in the 1900s...
and Aldwych
Aldwych
Aldwych is a place and road in the City of Westminster in London, England.-Description:Aldwych, the road, is a crescent, connected to the Strand at both ends. At its centre, it meets the Kingsway...
were built to improve traffic flow through central London. It incorporated the routes of several older streets.

Charing Cross Road is renowned for its specialist and second-hand bookshops. The section from Leicester Square tube station
Leicester Square tube station
Leicester Square is a station on the London Underground, located on Charing Cross Road, a short distance to the east of Leicester Square itself....
to Cambridge Circus
Cambridge Circus, London
Cambridge Circus is a traffic intersection at the intersection of Shaftesbury Avenue and Charing Cross Road in central London...
is home to specialist bookshops, and more general second-hand and antiquarian shops such as Quinto Bookshop, Henry Pordes and Any Amount of Books. Most of these shops are located on the ground floor of a block owned by a housing association
Housing association
Housing associations in the United Kingdom are independent not-for-profit bodies that provide low-cost "social housing" for people in housing need. Any trading surplus is used to maintain existing homes and to help finance new ones...
, which decided in 2001 to raise the rents sharply to bring them closer to the market level. This was opposed by the book dealers, who felt that they were providing a valuable service and contributing to the unique character of the area, and should not be treated in this way by a not-for-profit body. The association's counter-argument was that if the booksellers did not pay a market rent they were being subsidized by its low-income tenants. The booksellers attracted considerable public support and a reduced rent increase was imposed. Several of the bookshops closed nonetheless, including Silver Moon, apparently Europe’s largest women’s interest bookshop, which became part of Foyles
Foyles
W & G Foyle Ltd. is a bookshop at 113–119 Charing Cross Road, London, England. Foyles was once listed in the Guinness Book of Records as the world's largest bookshop in terms of shelf area and number of titles on display...
. Other shops closed more recently, Zwemmers art bookshop, Shipley the art bookshop in December 2008 and Murder One
Murder One (bookshop)
Murder One was from 1988 to 2009 a well known bookshop in the Charing Cross Road, "catering to readers interested in hard-to-find and collectable crime, mystery, romance and science fiction literature". It was the first UK bookshop to specialize in the crime and mystery genres, and at its opening...
in 2009. Smaller second-hand and specialist antiquarian bookshops can be found on the adjoining Cecil Court
Cecil Court
Cecil Court is a pedestrian street with Victorian shop-frontages in London, England linking Charing Cross Road and St. Martin's Lane. Since the 1930s it has been known as the new Booksellers' Row and it is sometimes used as a location by film companies...
. 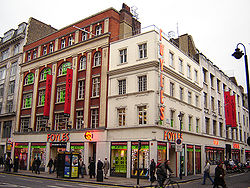 The northern section between Cambridge Circus and Oxford Street includes more generalist bookshops such as the venerable Foyles
Foyles
W & G Foyle Ltd. is a bookshop at 113–119 Charing Cross Road, London, England. Foyles was once listed in the Guinness Book of Records as the world's largest bookshop in terms of shelf area and number of titles on display...
and Blackwell's
Blackwell's
Blackwell UK Ltd is a national chain of bookshops, online retail, mail order and library supply services in the United Kingdom, which has an annual turnover of £74 million...
. A long-standing correspondence between New York based author Helene Hanff
Helene Hanff
Helene Hanff was an American writer. Born in Philadelphia, Pennsylvania, she is best known as the author of the book 84, Charing Cross Road, which became the basis for a stage play, , and film of the same name.- Career :...
and the staff of a bookstore on the street, Marks & Co., was the inspiration for the book 84 Charing Cross Road
84 Charing Cross Road
84, Charing Cross Road is a 1970 book by Helene Hanff, later made into a stage play, television play and film, about the twenty-year correspondence between her and Frank Doel, chief buyer of Marks & Co, antiquarian booksellers located at the eponymous address in London, England.Hanff, in search of...
(1970). The book was made into a 1986 film
84 Charing Cross Road (film)
84 Charing Cross Road is a 1987 British/American drama film directed by David Hugh Jones. The screenplay by Hugh Whitemore is based on a play by James Roose-Evans, which itself was an adaptation of the 1970 epistolary memoir of the same name by Helene Hanff, a compilation of letters between herself...
with Anne Bancroft
Anne Bancroft
Anne Bancroft was an American actress associated with the Method acting school, which she had studied under Lee Strasberg....
and Anthony Hopkins
Anthony Hopkins
Sir Philip Anthony Hopkins, KBE , best known as Anthony Hopkins, is a Welsh actor of film, stage and television...
and also into a play and a BBC
BBC
The British Broadcasting Corporation is a British public service broadcaster. Its headquarters is at Broadcasting House in the City of Westminster, London. It is the largest broadcaster in the world, with about 23,000 staff...
radio drama. 84 Charing Cross Road has not been a bookstore for many years.

The music venue the Astoria
London Astoria
The London Astoria was a music venue, located at 157 Charing Cross Road, in London, England. It had been leased and run by Festival Republic since 2000. It was closed on 15 January 2009 and has since been demolished...
was located here, as is one of the sites of St Martin's Arts College, as well as the music shops on Denmark Street
Denmark Street
Denmark Street is a short narrow road in central London, notable for its connections with British popular music, and is known as the British Tin Pan Alley. The road connects Charing Cross Road at its western end with St Giles High Street at its eastern end. Denmark Street is in the London Borough...
(known as Britain's Tin Pan Alley
Tin Pan Alley
Tin Pan Alley is the name given to the collection of New York City music publishers and songwriters who dominated the popular music of the United States in the late 19th century and early 20th century...
). A number of theatres are nearby, such as the Phoenix Theatre
Phoenix Theatre (London)
The Phoenix Theatre is a West End theatre in the London Borough of Camden, located on Charing Cross Road . The entrance is in Phoenix Street....
which has its entrance on the adjoining Phoenix Street.

Beside the road's southern end is a statue of Edith Cavell
Edith Cavell
Edith Louisa Cavell was a British nurse and spy. She is celebrated for saving the lives of soldiers from all sides without distinction and in helping some 200 Allied soldiers escape from German-occupied Belgium during World War I, for which she was arrested...
. Towards the north end is the Phoenix Garden
Phoenix Garden
The Phoenix Garden is a local community garden in central London, England, established in 1984.Located in St Giles behind the Phoenix Theatre, within the London Borough of Camden, the Phoenix Garden is nestled between the busy Soho and Covent Garden areas...
- an environmental garden run by local residents.

In the Harry Potter
Harry Potter
Harry Potter is a series of seven fantasy novels written by the British author J. K. Rowling. The books chronicle the adventures of the adolescent wizard Harry Potter and his best friends Ron Weasley and Hermione Granger, all of whom are students at Hogwarts School of Witchcraft and Wizardry...
books, the Leaky Cauldron pub is located on Charing Cross Road.