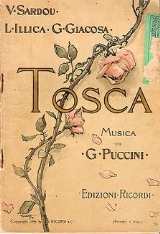 Overview
Tosca (ˈtɔska) is an opera
Opera
Opera is an art form in which singers and musicians perform a dramatic work combining text and musical score, usually in a theatrical setting. Opera incorporates many of the elements of spoken theatre, such as acting, scenery, and costumes and sometimes includes dance...
in three acts by Giacomo Puccini
Giacomo Puccini
Giacomo Antonio Domenico Michele Secondo Maria Puccini was an Italian composer whose operas, including La bohème, Tosca, Madama Butterfly, and Turandot, are among the most frequently performed in the standard repertoire...
to an Italian
Italian language
Italian is a Romance language spoken mainly in Europe: Italy, Switzerland, San Marino, Vatican City, by minorities in Malta, Monaco, Croatia, Slovenia, France, Libya, Eritrea, and Somalia, and by immigrant communities in the Americas and Australia...
libretto
Libretto
A libretto is the text used in an extended musical work such as an opera, operetta, masque, oratorio, cantata, or musical. The term "libretto" is also sometimes used to refer to the text of major liturgical works, such as mass, requiem, and sacred cantata, or even the story line of a...
by Luigi Illica
Luigi Illica
Luigi Illica was an Italian librettist who wrote for Giacomo Puccini , Alfredo Catalani, Umberto Giordano, Baron Alberto Franchetti and other important Italian composers. His most famous opera librettos are those for La bohème, Tosca, Madama Butterfly and Andrea Chénier.Illica was born at...
and Giuseppe Giacosa
Giuseppe Giacosa
Giuseppe Giacosa was an Italian poet, playwright and librettist.He was born in Colleretto Parella, now Colleretto Giacosa, near Turin. His father was a magistrate. Giuseppe went to the University of Turin, studying in the University of Turin, Faculty of Law...
. It premiered at the Teatro Costanzi
Teatro dell'Opera di Roma
The Teatro dell'Opera di Roma is an opera house in Rome, Italy. Originally opened in November 1880 as the 2,212 seat Costanzi Theatre, it has undergone several changes of name as well modifications and improvements...
in Rome
Rome
Rome is the capital of Italy and the country's largest and most populated city and comune, with over 2.7 million residents in . The city is located in the central-western portion of the Italian Peninsula, on the Tiber River within the Lazio region of Italy.Rome's history spans two and a half...
on 14 January 1900. The work, based on Victorien Sardou's
Victorien Sardou
Victorien Sardou was a French dramatist. He is best remembered today for his development, along with Eugène Scribe, of the well-made play...
1887 French-language dramatic play, La Tosca
La Tosca
La Tosca is a five-act drama by the 19th-century French playwright Victorien Sardou. It was first performed on 24 November 1887 at the Théâtre de la Porte Saint-Martin in Paris, with Sarah Bernhardt in the title role...
, is a melodrama
Melodrama
The term melodrama refers to a dramatic work that exaggerates plot and characters in order to appeal to the emotions. It may also refer to the genre which includes such works, or to language, behavior, or events which resemble them...
tic piece set in Rome in June 1800, with the Kingdom of Naples
Kingdom of Naples
The Kingdom of Naples, comprising the southern part of the Italian peninsula, was the remainder of the old Kingdom of Sicily after secession of the island of Sicily as a result of the Sicilian Vespers rebellion of 1282. Known to contemporaries as the Kingdom of Sicily, it is dubbed Kingdom of...
's control of Rome threatened by Napoleon's
Napoleon I
Napoleon Bonaparte was a French military and political leader during the latter stages of the French Revolution.As Napoleon I, he was Emperor of the French from 1804 to 1815...
invasion of Italy. It contains depictions of torture, murder and suicide, yet also includes some of Puccini's best-known lyrical arias, and has inspired memorable performances from many of opera's leading singers.

Puccini saw Sardou's play when it was touring Italy in 1889 and, after some vacillation, obtained the rights to turn the work into an opera in 1895.

Does anyone know a good source for a musical and dramatic analysis of the opera Tosca?
More
x